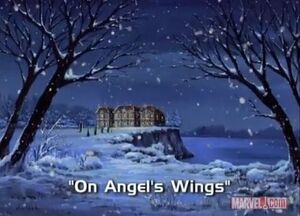 I think you really are an angel.

Appearing in "On Angel's Wings"

Synopsis for "On Angel's Wings"

Christmas time in New York City. In Worthington Tower, a Angel watches the news. A disabled woman is trapped inside of a burning building and no one is able to reach her. Warren walks out to the balcony, takes off his coat and spreads his wings. Outside of the building, firemen are holding back a teenage girl who keeps begging them to let her go in and save her mother. Angel flies in through a window and saves the woman without being seen. He drops her off on a bench nearby and flies away. The woman calls over her daughter and tells her that she was saved by a real angel. At the Institute, a holiday party is underway. Kit, Jubilee, and Magma are all opening presents from Jean. Kurt shows up with mistletoe and chases Kitty around trying to get a kiss. Xavier invites Logan to stay and spend the holidays with them. Logan tells him that he has important things to catch up on.

Rogue gives Scott a gift, and tells him that it might be fun with just the two of them, Xavier and Beast for the holidays. Jean watches from across the room as Scott opens his gift and acts kinda jealous. Kurt finally corners Kitty on a sofa. As he closes his eyes and leans in for a kiss, she slides out of the way and he kisses Bobby instead. Everyone loads up into cars and heads home for the holidays.Angel catches a mugger in Central Park. As the victim explains to a mounted policeman that he was saved by an angel, his briefcase drops from the sky and lands between them. The victim points up and they both see him flying away. As Warren picks up his coat and walks away, he's watched by a man hiding behind some trees.

The news starts reporting all of the Angel sightings. Xavier tells the others that he thinks that the "angel" is really a mutant. He sends Rogue and Scott to NY to try and recruit him. In NY, they go about questioning all of the witnesses. Scott shares some personal stories with Rogue, while they warm up in a diner.The man from Central Park continues to follow Angel. As Angel is flying over the Brooklyn Bridge, the man uses his powers to cause a car accident in such a way that it could only be Magneto. Angel goes to the rescue of a little girl and her family and saves them just as their car is about to go off of the bridge. As the crowd ohhs and ahhs over him, Magneto coils a bridge cable around his leg, causing him to knock the little girl off of the bridge. He manages to pull her out of the water, but Magneto yells out that he saw him knock her in on purpose. The crowd turns on Angel, calling him a freak and Angel flies off.

The little girl ends up sick and in the hospital. Angel flies in through her window to visit her. He gets trapped by a nurse and disguises himself as a doctor to sneak out of the room. At the desk, Rogue and Scott are asking to speak with her parents. The doctor tells them that they said they were going to their church to pray. Angel overhears this as he walks by, but as he leaves, a feather falls out of his coat. Rogue sees the feather and they chase after Angel. He escapes from a window and they watch as he flies away.At the church, Angel watches the parents as they pray. Magneto shows up and tries to recruit him. When Angel refuses, Magneto tries to take him by force. Rogue and Cyclops arrive just in time, and between the three of them they're able to knock Magneto out. Rogue manages to touch him, but Magneto comes to and knocks her away. When he takes off, Rogue flies after him (using his own power). She chases him through the city, but he ambushes her and uses a magnetic pulse to send her flying into a building. She saves herself at the last minute, but he sends a huge piece a building hurtling towards her. It knocks her out and she falls towards the ground. Angel arrives at the last second to scoop her up and save her.

Later, back at the hospital, Rogue and Scott invite Angel to come and visit the Institute and meet Xavier. A doctor comes in and tells the parents that the little girl will be okay. Scott tells Rogue that he doesn't think that Angel will come with them. They join Angel at a window to watch as the parents hug the little girl. They show the other X-Men celebrating the holidays with their families. Jean and her family are picking out a Christmas tree. Kitty is lighting a menorah as her parents watch. Kurt meets his parents in the airport as he arrives home. Evan, Storm, and his parents have a snowball fight. Wolverine is in a bar alone, shooting pool. And Beast and the Professor sit in front of the Christmas together.

Retrieved from "https://marvel.fandom.com/wiki/X-Men:_Evolution_Season_2_7?oldid=6108933"
Community content is available under CC-BY-SA unless otherwise noted.