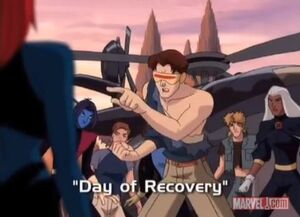 Appearing in "Day of Recovery"

Synopsis for "Day of Recovery"

Scott and Mystique face off. Jean tries to probe Mystique's mind, but somehow she's able to block it. Scott threatens her and she tells him that if he ever wants to see Xavier again he'll back off. They're interrupted by sirens and suddenly police cars and helicopters are everywhere. Everyone scatters. The New Mutants are surrounded, but Berzerker blasts the cars and leads them off through the woods. Tabitha covers their escape by blowing up some trees. The Brotherhood takes off in another direction and Wanda covers their escape. Jean is captured and stuffed in a police cruiser. Kurt 'ports in and takes off, but Kit yells for him to wait and he skids to a stop. She phases through the officers that try to catch her and right into the cruiser. Scott is surrounded and can't get to the car. Storm swoops in and picks him up to fly off. Kurt makes one more stop to pick up Bobby then they high tail it out of there. They're almost trapped in a road block, but Jean uses her Telekensis to float the car off into the sunset. News clips are shown of the X-men identifying several of them by name. They also show the general hysteria and fear running rampant over mutants. The search is on for the X-Men. The New Mutants follow Berzerker into the sewers where he says he knows of a place for them to hide.

At the lookout, the X-men regroup, but they aren't together long before the Brotherhood show up as well. Mystique tells them that she had nothing to do with Magneto's plan to expose them, but that the public response proves that Xavier was wrong and that humans and mutants will never be able to exist together. Jean bursts in and asks her why she's there, what she wants. Mystique says that she wants her team member back from the military, but she doesn't know where to start looking. Nick Fury shows up and says that he knows where to start. After a brief tense moment he hands over a disc with information about where the others are being held. When they ask him why he's helping them he says he has his reasons, but that he can't get involved officially. Fury and his troops disappear as quickly as they arrive. Storm tells the X-Men that they'll split up in groups, but before she's done speaking Mystique snatches the disc from her hand and says that she's in charge. Storm is furious, the sky darkens and lightening starts flashing everywhere. Mystique tells her to back off and Jean interrupts to remind Storm that Mystique is still holding the Prof somewhere. Storm calms down and Mystique starts barking out orders.

She sends Toad and Wanda to New York to find out if Magneto is really dead. Jean boosts the XM Velocity that was under custody and the rest of them head off to the coordinates that Fury gave them, which turn out to be Area 51, to rescue their team mates. In New York, Wanda and Toad end up breaking into a news van and watching the footage that was taped the previous day. In slow motion they can see that Quicksilver rescued Magneto right before the Sentinel landed on him. In the sewers, the New Mutants run into a mutant named Caliban. He asks them who they are and what there business is in the sewers. Berzerker tells him that they're on the run and they're mutants like him. Caliban tells them that he knew they were mutants, he always knows. He tells them that they'll be safe to follow him. In Area 51, Mystique morphs into a raven and sneaks in, then tricks the guard in the control room to leave. She shuts down the fence sensors and the others break in too. Storm is standing by in the Velocity for pick up. Inside Logan is being questioned by the military while the others are standing nearby in clear plastic cells. The Blob is the last one being cut free from the green stasis goo. Once inside the base the others split up. Bobby and Kit make there way to shut down the alarms, but Bobby up and they go off anyway. Suddenly troops are everywhere. Mystique tells Jean, Scott, and Lance to keep them back while she goes off with Kurt to find the prisoners. When the alarms go off the officer questioning Logan leaves to see what's going on and during the confusion Spyke is able to pop a spike into Logan's restraint and free him. Logan returns the favor and as Spyke frees the others Logan takes on the remaining troops. Blob is able to break free from the goo and they round up all of the troops and get them contained. Kurt and Mystique arrive, though a little late, and they take off to meet up with the others. When more troops start closing on them, Mystique tells Lance to bury them. He brings down the ceiling and would have crushed the men to death if Jean hadn't saved them at the last minute with her Telekinesis. Security seals all exits, but Bobby is able to find a hatch that leads to the roof.

Scott and Mystique are the last ones through and Scott slams the grate in Mystique's face. She screams at him to let her out, but he tells her that if she doesn't tell him where Xavier is he's going to leave her. She tells him he doesn't have the… but she's cut off as Scott seals the exit and traps her inside. Lance goes after Scott, but Jean stops them and tells them there's no time they have to leave now. Mystique is left behind as the others take off in the Velocity. Later at the Brotherhood house; Toad sneaks in because police are watching the house. When he gets back to the others Lance is mad because he was supposed to get clothes for all of them, but he only got Wanda's. Back at the lookout the X-Men talk over the loss of the Institute and Xavier. Kitty's upset because they can't return home or to school. Scott is upset that he didn't get the info about Xavier's location from Mystique, but Logan tells him that they'll find him on their own. Storm tells them all that they have a new world to deal with now, one that fears them and that somehow they have to find a way to teach them that they are the good guys before it's too late.

Retrieved from "https://marvel.fandom.com/wiki/X-Men:_Evolution_Season_3_1?oldid=5472191"
Community content is available under CC-BY-SA unless otherwise noted.