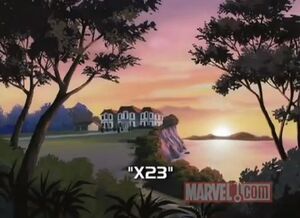 Enough! She's a child, not a weapon! How do you sleep at night?

X-23 breaks into S.H.I.E.L.D. and searched through the X-Men files. As this person comes upon Wolverines file, he reads it then slashes up the computer screens with adamantium claws. This triggers an alarm and soon guards pursue the intruder. The intruder is cornered upon the roof by guards, but creates a diversion by slashing up some piping. In the resultant smokescreen, the intruder jumps over the edge and slides down the side of the building and escaped the guards, the intruder disappears via the sewers.

At the mansion, Logan's holding one of his exercises and the pupils aren't happy about it. As Bobby jokes about the exercise, Ray gets trapped in a pit. Bobby goes searching for the others, and he soon finds Roberto, Jamie and Sam are trapped too. He then proceeds for the target, but bumps into Wolverine and gets a brandishing instead. As Wolverine threatens them with another run, two helicopters land near the mansion. Wolverine asks Beast to take over, and runs away.

Meanwhile, Charles is talking to Rogue, who's still in the infirmary. He tells her she's recovered and ready to retake her place on the team, but she insists she's not ready. Xavier asks her if it's anything to do with Logan's exercises.As the S.H.I.E.L.D.-helicopters land, Logan's joined outside by Xavier. He asks him why Nick Fury would suspect him of being involved in the break-in in S.H.I.E.L.D.-HQ, but Logan can't find an answer. He then boards one of the Helicopters under gunpoint. As Nick Fury shows Logan the damage, he tells him it was caused by someone with adamantium claws, and that they had found DNA-samples, which matched with Logan's samples. Logan can't understand how that could have happened, but the surprises don't stop there. Fury and Logan enter a room, where a lady is waiting for them. She is startled to see Logan there, and calls him 'Weapon X'. As Fury calms Logan and the lady, she begins to explain her presence.

She introduces herself as Deborah Risman, a scientist who used to work for an organization called Hydra. She explains an agent called X-23, who since seems to have betrayed the organization, performed the break-in. Answering to Logan's question (why she works for terrorists), she explains she was given permission to do some genetic experimenting, to create an ultimate weapon: the perfect soldier. As Hydra knew about the Canadian experiments, the 'Weapon X'- program, and since they had stolen some of the research into it, they had tried to make a 'Weapon X'- program for themselves. However, it did not have the success the original program had, as the first 22 attempts failed. The 23rd attempt was a success, as they had found a solution to the problem: using Logan's healing factor. To achieve this, Deborah reveals, they used Logan's DNA. But they didn't actually clone him: due to a fault in the process, she tells, the warrior turned out to be a girl. And the way she was formed resulted in emotional instability, and hatred. As Deborah remarks: They had created the ultimate warrior, but - they couldn't control her. And now X-23 had been unleashed upon an unsuspecting world, the question was: What kind of damage could she cause?While the exercises are still continuing, X-23 is spying on the X-Men. As she sees Hank and Jamie training, she is reminded of the ruthless training program she had to go through. As she sees Bobby, Samuel & Roberto sharing a prank, she almost attacks them. Right then, Beast stops the exercise, and X-23 remains unnoticed.

Back at S.H.I.E.L.D.-HQ, Deborah continues explaining X-23's upbringing: she was brought up, devoid of any form of love or pity. As a result, she became a troubled girl with emotional and behavioural problems. She further explains X-23 underwent the 'treatment' at the age of 12, at which point Logan is really enraged. Deborah explains him that's why she had come to SHIELD: she wanted to fix her mistake.Meanwhile, X-23 is still spying upon the X-kids, without being noticed. As she sees the love and care in the Institute, she is taunted by memories of her past. Later that evening, as Xavier is driving through one of the hallways, he feels somebody's presence. As he thinks it's Wolverine, his guard is down as he meets X-23, and promptly gets knocked out by her.

Meanwhile, back at S.H.I.E.L.D.-HQ, Fury tells Logan X-23 had sought up the X-Men's files. Logan understands they are X-23's next targets, and says he'll deal with her. Fury objects, but Deborah tells him his agents wouldn't be successful against her. Fury accepts the situation and gives Logan one hour.As X-23 is looking through the possessions of the X-kids, and is very intrigued by them, Ray enters the room. (He was actually looking for Jean.) X-23 cuts him out immediately. Meanwhile, Bobby is wondering where all of the others are. He enters Kurt's room, and finds an unconscious Kurt, Kitty and Jean. As he panics and backs out of the room, X-23 takes him out.

Back in one of the other rooms, Scott and Ray find the professor, and discover he, like Magma, is knocked out. As they study the 'inhibitor' that's keeping Xavier unconscious, they hear someone at the door. They prepare an ambush, but find it's a startled Rogue. As she freaks out and demands an explanation, Scott explains the institute has been infiltrated and several of the X-Men have been incapacitated. Ray tries to short out the inhibitor, but Logan arrives just in time to stop him doing it. Seems the inhibitors explode when they're overloaded. As Scott demands an explanation, Logan promises to give one later. He wants them out of there, but they don't want to leave the others. Together, they begin searching the other rooms.After having looked through some of the rooms, and having found Storm, Roberto, Jamie and Hank, they are ambushed by X-23. Logan falls through a freshly cut hole, and Scott, Ray and Rogue find themselves out manoeuvred by X-23. As X-23 fights Ray and Scott, Rogue takes off her gloves to immobilize her, but the next moment, Rogue finds herself used as a weapon against Ray and Scott, and moments later, Rogue's down too.

As X-23 looks at the unconscious kids, Logan re-enters the room. She knocks him over and runs away, he tries to follow her. In the corridors, she ambushes Logan, and they start fighting. Logan's seriously disadvantaged, as he hesitates to hurt her and as he's out manoeuvred too by her. As they are fighting, Logan tries to calm her, by saying he understands her and that she's gone through things a child shouldn't go through. She responds by saying she's not a child, and attacks again. Logan discovers X-23 potentials, he's slammed against and through the front door. So the fight continues outside. As Logan asks her why she's attacked the X-Men, X-23 answers not they, but Logan himself was her target. She blames him for all she had to go through. Logan finally pops out his claws, to catch X-23's blows, as she, confused, hears him say that he didn't know about the project and that he too was used, and that he understands her feelings as he's the closest thing she has to a family. She breaks down and begins to cry. Logan hesitates, and then tries to comfort her.

Right then, they hear helicopters. X-23 reacts scared, but Logan commands her to seek shelter, he'll deal with it. The chopper lands, and Fury gets out and tells Logan she'll have to come with him. Logan tells him she's been through enough, and refuses to let Fury take her. Fury has to back off, and leaves.The next morning, Xavier and Logan find a troubled Rogue in her room. They ask her to join an exercise, but Rogue doubts she's feeling well enough for that. Logan responds she might actually like this one. Outside, the student's first reaction to another exercise is about the same as Rogue's. But then Logan explains the exercise: a game of Mutant ball. As Logan points to Bobby as the first target, Xavier asks, bemused, why Logan's suddenly changed in his attitude towards the kids. Logan responds that they sometimes have to be reminded to enjoy their youth.

This episode is the first ever appearance of X-23, also known as Laura Kinney. Her first comic appearance isn't until NYX in 2004.

Retrieved from "https://marvel.fandom.com/wiki/X-Men:_Evolution_Season_3_10?oldid=4639625"
Community content is available under CC-BY-SA unless otherwise noted.