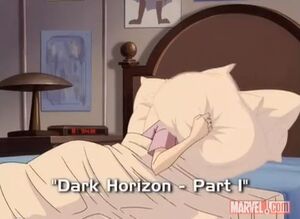 Come on, we're missing the last day of school!

Appearing in "Dark Horizon, Part I"

Synopsis for "Dark Horizon, Part I"

It's night time, and everybody should be asleep in the Institute. As it turns out, someone's roaming around the corridors. This person enters the professor's room, and moments later; a slight moan can be heard. Next, we see Jean asleep. She isn't aware there's somebody entering her room and another moan is heard from her room. Kitty is awoken by another moan, coming from Scott's room. She jumps out of her bed, but as she goes towards her door, somebody opens it. She hides behind the door, and phases through the wall. She never realizes it's Rogue who enters the room. As she tries to wake Scott, she notices he's out cold. It freaks her out, but next moment, she's down. Rogue had followed her, and has absorbed her powers.

Next morning, Kitty's awoken by her alarm clock. She's reluctant to wake up, suffering from a headache (and not remembering the night's events). It isn't 'till she looks at her clock; she notices she's overslept. Moments later, she phases into Kurt's room. He too is reluctant to wake up, until Kit phases him right through his blankets and tells him they're gonna be late for school. Kurt ports them both down. Rogue's in the bathroom, not feeling too well. She thinks she's just had a bad dream. Downstairs, the other kids are preparing breakfast, with or without using their powers. Rogue enters the room, but doesn't feel like having breakfast.

Not much later, we see the kids outside school, running to be in time for their lessons. Rogue, however, suddenly hesitates and stops. She turns around and steps into a black limo that has just pulled over. As Scott and Jean are walking to their classes, they're talking about the fact it's their last day at Bayville High. While Jean thinks it's sad, Scott can't wait to get out of there. Principal Kelly stops them. He too thinks it's not a bad thing Scott and Jean are leaving, and firmly demands the graduation is not to be disturbed by any mutant. Scott replies he'll be gone when he gets his diploma.

Meanwhile, in the Brotherhood's house, Toad's fooling around and generally annoying the Blob, as he gets rid of the trash (out of the window) and Pietro gets the newspaper. Moments later, Rogue gets to the front door (unseen) then rings the doorbell. As Wanda goes to open it, she's confused that the door is standing open. She looks around, but sees nobody. Going back indoors, Wanda's suddenly lifted into the air, and sees Rogue floating above her. Wanda gets touched. In the living room, Fred is having some cereal while watching television with Toad Lance's having some breakfast too, 'till he notices Wanda lying on the floor. He's surprised, but next moment, Rogue got him too.

In the living room, things get weird as Fred's cereal bowl suddenly gets catapulted into Toad's face. Before he realizes it, Blob's been caught by Rogue, too. When Toad gets the bowl out of his face, he sees Rogue and manages to dodge her assault. But Rogue ports right in front of Toad, and moments later - "I hate this part!" - Toad's out too. Pietro, meanwhile, gets downstairs and finds the others unconscious. He suddenly notices a shadow and dodges Rogue's attack. He asks her what's going on, but she only opens her eyes and looks at him with two glowing red eyes, which spooks Pietro. As he runs away, Rogue pulls him back with telekinesis. Moments later Rogue leaves the house. Mystique's waiting for her.

Retrieved from "https://marvel.fandom.com/wiki/X-Men:_Evolution_Season_3_11?oldid=4295908"
Community content is available under CC-BY-SA unless otherwise noted.