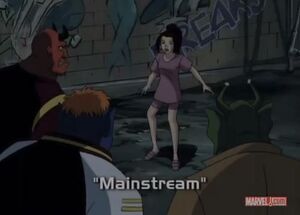 You have been chosen to take the first step into this new world. To lead the way, to be a beacon of hope for mutants yet to come. This is not only a big responsibility, it is an honor. I'm always astonished by the wondrous things that can be built on the ashes of tragedy. For even in the face of bigotry and discrimination, the X-Men will endure.

The X-Men are now living underground beneath the ruins of the mansion. Kitty is sneaking a midnight snack when Kurt ports in and catches her drinking straight from the milk carton. As they argue over it, Kit sees intruders on the monitors. They port upstairs to take care of them before the alarms wake everyone up. Kit gets to them first and she's startled by their monster like appearance. Kit and Kurt take them out and it turns out that it's just a bunch of high school guys in masks. They've been spray painting graffiti everywhere. They run off saying nobody wants the mutants around. Kit tells Kurt it was a lot easier when only the Brotherhood hated them. Next day, Jubilee's parents have come to take her home. Wolverine tells Xavier that first Wolfsbane is gone, now Jubilee. Xavier tells him that he understands that the parents don't feel that their children are safe after all that's happened. Wolverine blames himself for not realizing that Mystique was impersonation the Prof., but Xavier tells him that with her advanced mutant powers, she's now able to conceal herself from all of them completely.

Xavier mentally wakes up the rest of the X-kids and calls the older kids into a meeting. All of the students are now crowded into a few rooms in the sub floors. At the meeting Xavier tells them that they're going to be allowed back to school for one day as long as they do not use their powers. That night the school board is holding a meeting to vote on whether or not to ban mutants from the schools permanently. Kitty tells him that she's afraid to go back, that they don't fit in there any more. Xavier tells her that they now have a chance to go back and be appreciated for everything they are. They see the morning paper calling mutants monsters and Spyke gets angry. Nightcrawler starts reading the article and realizes that his identity is still "unknown". Cyclops tells him that it's only a matter of time before everyone realizes who he really is since he lives at the Institute. Xavier tells them all that it's an opportunity for them to set an example and he wants them all to be at the meeting that night.

At school the normal kids gawk and taunt the X-Men as they file into school. Nightcrawler slowly distances himself from the others and when Kitty looks back and realizes she turns away mad. Taryn gives Scott the cold shoulder. Duncan greets Jean happily telling her that he's willing to overlook her "problem". That they can even use it to their advantage for tests and things. Jean gets angry and tells him off. She breaks it off with Duncan and drags Scott away by the hand. In town Wolverine is riding on his motorcycle when he meets up with Colossus riding another motorcycle. Colossus slams his fist into the back of a truck causing a huge wreck. Wolverine jumps the wreck and follows him. At the Brotherhood house, Toad and Blob are heckling Lance because Kitty won't talk to him any more. Principle Kelly shows up to invite the boys back to school. At first they don't want to go, but Kelly drops some not too subtle hints that they'd have the run of the school if they came back. So they decide to return.

At school Kurt is trying really hard to hide the fact that he's a mutant. Amanda questions him about abandoning his friends and she's not too happy about it. Duncan has decided to blame Scott for the fact that Jean broke up with him. He and some of his friends start pushing him around trying to get him to use his powers so he'll be expelled. Kitty and Rogue show up to defend Scott and scare off Duncan and company. As they're leaving Kitty sees Kurt hiding behind a building. He was there the whole time but didn't step up to help Scott. He turns to leave, but some other kids are there and ask him if he isn't friends with the mutants. He tells them that he "used to be" and tries to get away, but Kit and Rogue are right there behind him and heard the whole thing. Kitty tells him thanks, but Kurt rambles on about having to be somewhere and runs off. Wolverine catches up with Colossus at a barn. The two begin to fight. Kelly calls Duncan into his office and tells him that he shouldn't mess with the Xavier kids, which they always stick together and he shouldn't fight them alone. He also casually mentions that the Brotherhood boys also don't like Scott. Back at the barn, Colossus tells Wolverine that Magneto has sent him to deliver a message. Magneto wants Wolverine to come and join him. Wolverine tells Colossus that he won't be a lackey like him. Colossus gets upset and says he's not a lackey, he has no choice. Wolverine tries to get him to join the X-Men, telling him that no matter what Magneto has on him they'll help. Colossus tells him that he can't and leaves.

The Brotherhood show up at school and start terrorizing the normal kids. Meanwhile Jean is playing basketball in the gym, but the other girls accuse her of cheating and using her powers and she gets benched. As she's sitting there she notices Kelly packing up a lot of the athletic trophies. She asks him what he's doing and he says that he doesn't think that all of the awards were won fairly with them using mutant powers. He calls mutants a menace and calls Jean a cheat. Jean gets mad and Kelly tells her that it could be dangerous for her to have a hot temper with her powers. He tells her that he has a responsibility to protect the normal kids from the mutants. That night at the meeting as Jean is giving her speech, the Brotherhood and Duncan team up and start a fight with the other X-kids in the parking lot outside. Cyclops tells the others that they are not to use their power, no matter what. So the X-kids take a beating and do their best to get out of harm's way. As Jean is finishing her speech, Lance starts to bring down the entire auditorium.

Everyone rushes outside and Kelly tries to turn the board members by saying that the mutants are all out of control. That they can't be allowed back to school. Xavier says that his students are showing remarkable control, even against the overwhelming urge to use their powers. The Brotherhood steps it up a notch and the X-Men are finally forced to use their powers to save the innocent bystanders. Kurt finally steps in to help and when the X-Men regroup the Brotherhood runs off. The X-Men stand in front of the auditorium and look sadly at the destroyed parking lot. Next morning, Xavier calls everyone to another meeting. He tells them that the board voted to allow them back into school. The kids aren't too happy about going back, but Xavier tells them that it's not only an honour for them to be taking the first step in this "new world", but it's also their responsibility for the mutants yet too come. He tells them how proud he is of them, and that no matter what, the X-Men will endure.

Retrieved from "https://marvel.fandom.com/wiki/X-Men:_Evolution_Season_3_3?oldid=5225068"
Community content is available under CC-BY-SA unless otherwise noted.