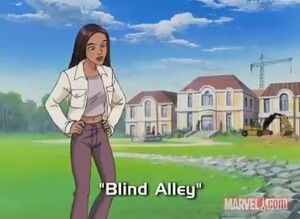 Logan, have you ever...you know...really cared for someone? I mean, you felt it so strong you couldn't even get the words out?

During the rescue of the X-Men and Brotherhood from Area 51 during, Mystique was trapped and left behind by Scott when she refused to give him the location of Xavier. Inside Area 51, scientists are running tests on Mystique. She is able to incapacitate a female scientist and escape. After a series of close calls, she finally gets outside where she morphs into a raven and flies away. At the Institute, everyone is working to get the house restored. Scott and Logan have stripped off their shirts and are on the roof working on a satellite dish. Storm and Jean are on the lawn nearby working on a fountain. Jean and Scott keep getting distracted as they stare at one another, leading to conversations about how they've become close over the last year. Jean and Storm talk about the connection that Scott and Jean created when her powers were out of control. About how Scott's always been there for her. Storm tells Jean that it's a good day for new beginnings and for telling people how she really feels. Scott asks Logan how a guy is supposed to know if a girl feels the same way. Logan tells Scott that if he doesn't go ahead and tell Jean how he feels, then he'll do it. Scott says he'll tell her. A raven flies at Scott trying to claw him and then flies off just as fast.

Later as Jean and Scott are about to have the big talk, Scott gets a call from Alex. Alex is stranded in Mexico and can't get in touch with his foster parents. Scott tells Jean that they'll have to talk later and takes off to rescue Alex. In Mexico, it turns out that it isn't Alex at all, it's really Mystique. She hits Scott with some sort of knock out gas. Scott wakes up in the desert alone and without his glasses. He wanders around blind all day and into the night. As the night drags on, he's attacked by a pack of coyotes. At the Institute, Jean wakes up from a nightmare. She tells Xavier that she's had a vision of Scott in trouble. Xavier tells her that Scott is out of psychic range even for him and that she just had a bad dream.In Mexico, some oil rig workers see Scott's optic blasts in the distance as he tries to fight of the coyotes. Scott falls down a hill and is knocked unconscious, but the workers get to him just in time to save him. Mystique watches them drive away with Scott from a distance and is quite displeased. She follows them.

Next morning at the Institute, Jean calls Alex at home to make sure that Scott is really okay. She finds out that Alex never really was in Mexico or even called. Scott comes to in a hospital. The doctor tries to force his eyes open to check for a concussion and major damage ensues. Scott runs away and ends up stumbling around lost in Mexico City. Meanwhile, Jean and the others head out to find him. Some thugs try to start a fight with him, but Scott uses his powers and frightens off all but one of them. The last one turns out to Mystique. She tries to gas him again, saying she's going to take him to the North Pole this time and abandon him. Scott knocks the container away and the two begin to fight.

Jean gets some telepathic flashes of Scott and they use them to close in on his location. Scott and Mystique continue to fight, with Mystique basically kicking Scott's a** all over the place. Scott ends up blasting the floor out from under them and they're dropped into the basement. In the dark, Mystique has a harder time fighting, but Scott still takes a few more good beatings.Jean shows up and tells him that she saw Mystique take off. Scott asks how she found him and she tells him that Cerebro led them right to him. Scott knows something is up Cerebro can't pinpoint exact locations and blasts Jean to the floor just as she's about to hit him with a huge beam. Mystique morphs back into her true self and goes after him again. She stops suddenly in midair and is dragged back. The real Jean uses her TK to knock Mystique around a little while and save Scott. Scott asks her how she was able to find him and she tells him that she used their "bond". Later on the jet, Jean gets Scott another set of glasses and the two cuddle on the ride home. Wolverine, Storm and Xavier see them together and they all agree that it's "about time."

Like this? Let us know!
Retrieved from "https://marvel.fandom.com/wiki/X-Men:_Evolution_Season_3_5?oldid=6499553"
Community content is available under CC-BY-SA unless otherwise noted.