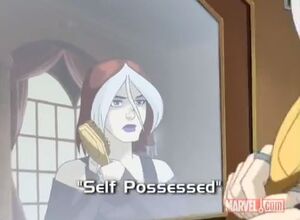 An ancient mutant will rise to once again walk the earth. Your fates, both yours and Rogue's, are in his hands.

Appearing in "Self Possessed"

Synopsis for "Self Possessed"

Rogue and Scott are playing racquet ball. Rogue wins and asks Scott for a rematch tomorrow. Scott tells her he can't because he's going to a concert with Jean. Scott packs up his stuff and leaves and Rogue is pretty depressed. She has sudden flashes of memory (of Jean and Scott together) and has to sit down. Mystique meets up with Destiny and asks her what's so important. Destiny tells her it's Rogue. While before Rogue was to play a clear role in their futures, now she's not sure that Rogue will live to fulfill her destiny.Back with Rogue who is still batting around the racquet ball. She has more sudden flashes (this time of the Blob) then throws her racket. It slams into the wall and puts a hole through it. Later as she's getting ready for school, Wolverine confronts her with the shattered racket. Before she can explain what happened, Kitty runs by and drags her away for school. Kit tells Rogue that Jean is going to give them a ride in her new SUV.

Everyone loads up into Jean's SUV. Kit asks Jean if she wants to carpool to the concert that night. Jean tells her she can't, that she's going with Scott. Kit says that Scott won't mind… Unless of course it's some kind of date. Kurt ports in and finds out they're going out. Kit and Kurt tease Jean about going out on a date with Scott, which really upsets Rogue. She tells them to drop it. At school, Rogue has more of the memory flashes/attacks (Kit) and accidentally phases through into the girl's bathroom. Risty is inside and is really excited to see Rogue. She tells Rogue that her parents wouldn't let her come back from England right away because of the whole mutant "fuss". As they walk and talk, Rogue has another attack (Storm) and electrocutes a water fountain. Rogue gets really upset and rushes off. Risty finds her outside and asks her if those were her mutant powers.

Rogue explains to Risty about her powers and how they work. She tells her that everyone she's absorbed is still inside of her head, and it's getting pretty crowded. Risty talks Rogue into going to the concert with her (to cheer her up). Rogue tells Risty that she really missed having her around.At the concert that night, Kit shows up with Jamie (Multiple) who's dressed up in a oversize Tuxedo. He begs her to wear a corsage and she finally agrees, but tells him that it doesn't mean they're on a date. He tells her that he borrowed Roberto's tuxedo and everything, and he's supposed to bring back a full report. Kit is exasperated and drags him towards the stage, reminding him not to bump into anyone.They go by Scott and Jean and Jean teases Kitty about her "date". Scott asks what that was all about and Jean says it was payback, 'cause Kit teased her earlier about their date. There's an awkward conversation abut whether they really are on a date or not and even if they are it's not really anyone's business.

Rogue and Risty show up and Risty catches Rogue looking at Scott wistfully. Risty asks her if she still has a thing for him. Rogue denies it and tells her that Scott and Jean are a couple now. Risty says they deserve each other and Rogue could do better anyway. They move closer to the stage, but Rogue starts to get worried and says that it's too crowded.People start pushing and shoving and a girl falls into Rogue, tearing her sleeve off. As she bumps into more people, Rogue's power kicks in and they begin dropping around her. She's shoved into Risty and as the two touch, Risty morphs back into Mystique and screams. Mystique drops to the ground and Rogue morphs into Risty as she stumbles away.

She morphs back into herself and collapses as another attack hits her (Sabertooth). This time instead of merely having the powers though (since she just absorbed Mystique's power), she actually morphs into Sabertooth. As Sabertooth she starts wrecking the concert equipment and stage. Multiple jumps on her and tons of Jamies appear. Security shows up and Rogue/Sabertooth throws them all off.Mystique finally comes to as Scott blasts Rogue/Sabertooth and collapses the stage setup on her. Rogue has another attack (Juggernaut) and she morphs to Juggernaut beneath the rubble. She flings the rubble off of herself and creates a hole in the auditorium wall, through which she escapes. Mystique follows her through the hole. The X-kids regroup and freak out about Sabertooth, Juggernaut and Mystique all being together at the same time. They decide to head back to the mansion for help. Kitty drags a battered Jamie with her.

Outside now, Rogue morphs into Magneto and pushes away the cop cars chasing her. Then she morphs into Quicksilver and takes off. When she runs into another car, she morphs into Arcade and hides in an alleyway. As she collapses shivering, she morphs back into herself. Mystique tracks her to the alleyway and tries to help her. She tells Rogue that she only became Risty so that she could be close to her. They get into a fight and Rogue morphs into Mystique.As Rogue/Mystique tries to fight Mystique, Mystique backs away saying that Rogue knows the real truth. Mystique adopted Rogue when she was only four and Rogue is her daughter. Rogue gets really stressed out, morphs into herself and runs away. She ports onto a rooftop crying. As she hears a motorcycle in the distance (Wolverine's), she morphs back into Sabertooth and goes after him.

Rogue attacks Wolverine, but he's pretty quick to realize that it's not actually Sabertooth. As he's dodging Rogue's attacks, Cyke and some more of the X-kids show up. Cyclops blasts Rogue/Sabertooth right away and knocks her into a warehouse. Wolverine tells him that it's not really Sabertooth, it's Rogue. They follow her into the warehouse.As they search for her, Rogue morphs into Cyclops and blasts the real Cyclops. Wolverine helps him to his feet as Rogue morphs into Avalanche and rumbles the place. She morphs back into herself again and cries out for help. Wolverine and Cyclops tell her that they will help her, they're her friends. Rogue has more flashes, this time of Risty, and she gets really angry and tells them that she has no friends.Rogue morphs into Storm and blows Cyclops and Wolverine out of the warehouse. She lifts herself into the air and starts blasting Cyclops's beams and flinging lightening at the X-kids all at once. Wolverine says that she has control of all of the powers at the same time. The X-kids scatter. The X-jet with Storm, Beast and Xavier arrive and they almost slam right into Rogue in mid-air. She uses Magneto's powers to shove the jet away and it crashes into the ground. Beast is knocked out, and Rogue continues to gun for the X-kids.

Storm gets out of the plane. Jean tries to take Rogue out with her telekinesis, but Rogue turns it back on her and knocks her on her butt. Scott tries to hit her with one of his blasts, but Rogue just blocks it with Jean's telekinesis and fries him with lightening. Kurt tries to port behind her and bring her down, but when he lands, he slams into the ground alone. Storm goes one on one with her, telling her that she's sorry she has to do it, but she can't let Rogue hurt any more people. She hits Rogue with lightening and tries to knock her out, but Rogue sustains the blast and throws some lightening of her own at Storm. Storm is hit multiple times and drops out of the air. Jean is able to catch her with her telekinesis.

Wolverine tells them that he's the only one who can stand up to the punishment and has Bobby ice him up to Rogue in the air. He tackles her and they slam into a parked car. The force causes Rogue to multiply (from Jamie's power) and they all turn on Wolverine. He tries to talk her down, but she uses Magneto's power to lift him up. The other Rogue's blast him with Cyclops's power and knock him down the street. He slams into the X-van. The Rogues are right on his tail, and they lift him into the air again. Wolverine tells her that she's being pushed around by all of the other personalities inside of her, and that the Rogue he knows wouldn't let anyone get away with that. Rogue finally pulls her self together and reabsorbs the other Rogues. She falls to the ground and tells him that she's trying to fight them, but there are just too many. Xavier helps her to expunge the other personalities one by one. Until finally it's just Rogue again and she collapses into Wolverine's arms. Wolverine asks Xavier if she's going to be okay, and Xavier tells him that he's not sure yet. Mystique watches them from a rooftop and is pretty upset as they all leave.

Back at the Institute, Rogue is in the infirmary. Driving out the other personalities has left her weak and "very fragile". Xavier says that she still has to deal with the whole Risty/Mystique betrayal. Logan talks to Rogue about how much the betrayal hurts and tells her that she needs to let her real friends be there for her.Outside at the gate, Mystique and Destiny talk again. Mystique asks her if Rogue is back in their future again. Destiny tells her yes, but great darkness approaches. An ancient mutant will rise again to once more walk the earth and both Rogue's and Mystique's fates are in his hands.

Retrieved from "https://marvel.fandom.com/wiki/X-Men:_Evolution_Season_3_8?oldid=5225071"
Community content is available under CC-BY-SA unless otherwise noted.