"Under Lock and Key" 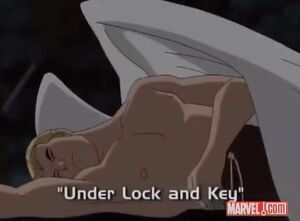 Episode Title
"Under Lock and Key"

I don't care what it takes! Destroy that spider!

Appearing in "Under Lock and Key"

Synopsis for "Under Lock and Key"

Gambit breaks into Angel's house and steals an ancient relic. Angel catches him and chases him outside where Gambit meets up with Mesmero and hands him the relic. Angel catches up to them and Mesmero uses his powers to knock Angel out. Mesmero tries to leave with the relic, but Magneto shows up and traps him using iron fence rails. He tells Mesmero he has a lot of courage to hypnotize one of his men to do his stealing for him. Mesmero tries to use his powers to blast Magneto, but it doesn't work on him. He has Gambit charge up some of his cards, but Magneto tightens the bars around him, crushing him, and tells him to release his hold on Gambit. Mesmero does and Magneto takes the relic from him and tells him that they are going to find out if this was all worth it. He pulls up the ground under Mesmero and pulls him along behind as he leaves. Angel wakes up just in time to see the three of them leaving.

At the Institute, the X-kids play a game of Mutant ball (softball with powers). Angel shows up and breaks up the game, he tells them that he needs to see Xavier. At Magneto's base, Mastermind is searching through Mesmero's mind to find answers. He tells Magneto that the relic is one half of the "Spiderstone" and that when they two pieces are combined they form a key to release the most powerful mutant of all time, En Sabah Nur (Apocalypse).

Back at the Institute, Angel identifies Mesmero as the one that blasted him. Bobby catches Kitty and Amara "checking out the new guy" (Angel) from the doorway as Xavier tells Angel about Mesmero. He tells him how he manipulated Jean into stealing the rings that formed the first key and how the Spiderstone is half of another key. Xavier says now that Magneto is involved they have to find the other half of the key first. Bobby jumps in and says that hey wants to go along, but they tell him that he's not responsible enough.

Meanwhile, Magneto is furious that Mastermind allowed Mesmero to escape, and with the piece of Spiderstone. He tells Mastermind that they're going to London to stop Mesmero from getting the other half of the stone. At the Institute, Kurt brings Rogue her dinner. He tells her that Wolverine and Storm are out searching for their mother and that the others have gone to London. She tells him to go away and he tells her that it's no way to treat her little brother. She tells him that they aren't related, but Kurt says that they are and no matter what she's going through, he'll be there for her.

In London, the X-Jet arrives at the museum. Xavier asks Cyclops to go in the back and tell their stowaway that they've arrived. Cyke fishes Iceman out of one of the storage compartments.Magneto and his crew head into the museum and take care of the security. The X-Men aren't too far behind them. While the X-Men and Magneto's crew mix it up, Magneto finds Mesmero and traps him in an elevator compartment. As he's dragged into the elevator, Mesmero loses the Spiderstone and it's drawn to the other piece. When the two pieces meet and fit together they form a huge mystic spider.

Magneto tries his best to keep the spider from leaving the museum, but the spider is barely slowed down and drags Magneto behind it. Mesmero is able to break free and chuckles to himself when he sees Magneto struggling with the spider. He takes off. The spider bursts free from the museum and lands on some cars close to Xavier. Magneto tells his crew to destroy the spider, no matter what it takes. Xavier tries to reason with him and say that they don't know enough about the spider to destroy it, but Magneto says he knows enough and that it is one key that won't be unlocking any doors. Xavier tells the X-Men he wants them to capture and protect the spider.

Colossus, Sabretooth, and Pyro each take a turn at the spider, but it beats them to a pulp. Mesmero runs into Xavier as he's trying to escape. Xavier uses his telepathy to probe his mind and find out about Apocalypse. Mesmero gets away. The X-Men get to the spider, but they have no luck stopping it. It reaches a populated area and Gambit crashes into it with a double-decker bus. He climbs out and charges the bus with it still on top of the spider. Angel flies over in time to see the huge explosion. The spider is slowed just long enough for Magneto to catch up to them. The X-Men and Xavier arrive to see Magneto trying to destroy the spider. Xavier tells him to stop, but Magneto says that he has to destroy the key. Using his full power, Magneto is just barely able to destroy the spider and the Spiderstone drops to the ground.

Xavier tells him that he's done exactly what Mesmero wanted him to do, that the spider wasn't a key, but actually a guardian created to prevent Apocalypse from escaping. Mesmero manipulated him the whole time knowing that he was the only one with enough power to destroy the guardian. Now with the spider gone, the second door will open.Xavier tells them all that it's imperative they find out where the spider was heading. If Mesmero is able to find the third key and release Apocalypse, their world is going to change forever.

Retrieved from "https://marvel.fandom.com/wiki/X-Men:_Evolution_Season_3_9?oldid=5026674"
Community content is available under CC-BY-SA unless otherwise noted.