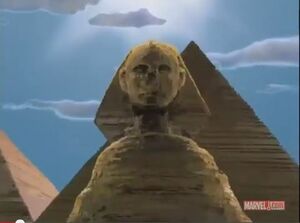 They know nothing! Apocalypse will not rule this land. Not as long as I'm alive!

Yucatan Peninsula, Mexico. Apocalypse's transport appears atop an old Mayan pyramid. The stone structure crumbles away to reveal a high tech one underneath. The transport opens and Apocalypse appears. He uses his powers to activate the pyramid and erect an energy dome around the area. In Egypt, beneath the sphinx, Magneto and the Acolytes continue to search for information about Apocalypse. But after questioning locals and tearing apart the rooms they still haven't found a clue. At the institute, Xavier searches with Cerebro. But no one can find any trace of Apocalypse anywhere. Xavier and Beast discuss Apocalypse’s plans and realize that they need to find out more about the Eye of Ages. The New Mutants goof off outside playing basketball. Logan finds Rogue outside and tries to talk to her about everything that's happened. He tells her that none of it was her fault. Rogue shrugs it off, but she's really upset about the now stone Mystique being in the Institute. Logan tells her that Xavier has tried everything possible, but that there's nothing he can do for Mystique, she's nothing but solid stone now. So, knowing how much it bothered Rogue to have her around, he gave her to the Brotherhood. Rogue is momentarily shocked but then says good riddance and stalks off. Logan watches her walk away, speechless.

At the Brotherhood house, Toad, Blob, and Quicksilver are generally degrading and abusing the stone Mystique for their amusement. Wanda tells them to get a life. In Mexico, some archaeologists discover Apocalypse dome. Back at the institute, Kurt tracks down Rogue to talk to her about Mystique. He's outraged that Xavier has given their mother to the Brotherhood. Rogue doesn't care and tries to get away. He ports in front of her again saying that Mystique belongs at the Institute with them. Rogue gets mad and asks why he even cares. She starts to walk away. Kurt tells her that it just made him feel better and ports away to the Brotherhood house.

Toad and Blob are still dragging around the stone Mystique. Wanda calls them "immature clods" and tells them the least they could do would be to take her to see Agatha Harkness, that she might be able to help her. They ignore her though and continue making plans to turn Mystique into a fountain. As soon as they leave Mystique alone Kurt sneaks up to grab her. Wanda catches him, but before she can hex him he tells her that Mystique is his mother. Wanda turns and walks away. Kurt ports Mystique out of the house. Back in Egypt, Colossus is late reporting in and Magneto jumps all over him about it. He tells Pete that if he ever wants to see his family again he'll find answers. Pete turns on him and shoves him up against a column. He tells Magneto that his wounded pride is driving him to madness. Magneto is furious and slams Pete up against the wall, threatening to "crush him like a can". Pete changes back to human and drop to the floor telling Magneto that he's going to have to do it without the power of magnetism. He tosses Magneto across the room and starts to go after him, but Gambit steps in to break up the fight, saying that Magneto is their best chance at stopping Apocalypse. Pete reluctantly walks away.

At Xavier's, Rogue catches Kurt with the stone Mystique in his room. She's furious that he's brought her back and tells him that if he doesn't get rid of her she will. Kurt tries to calm her down. He tells her that Mystiques anger and hatred destroyed her and if Rogue keeps going the way she is it will destroy her as well. Rogue storms out of the room saying that it's already destroyed her. Kurt turns around to find the stone Mystique crying. Xavier and Beast do more tests, but Beast tells Kurt that what he saw wasn't really tears, it was probably just condensation. Kurt refuses to give up even after Xavier tells him that there's no hope for Mystique. He ports away just as Jean shows up to tell them that they've found Apocalypse. The X-Men take off on a "fact finding" mission to Mexico. In Egypt, Magneto uses a bunch of the scrap metal to form one of his transport spheres. He tells the Acolytes that he's going without them. That the fight is between the "higher evolutionaries" and that he guarantees that only one of them is going to survive. He takes off in the sphere at super speed leaving the Acolytes behind in the Sphinx.

At Apocalypse pyramid, the X-Men try to run tests on the energy dome, but everything they try literally blows up in their faces. Xavier and Jean are blocked from scanning it telepathically as well. At home, Kurt finds Wanda and asks her to set up a meeting with Agatha. Back at the pyramid Xavier warns the X-Men that they must avoid any act of aggression, just then Jean points to Magneto's sphere, which comes hurtling towards the pyramid. It flies above the dome and as it slows in it's upward climb, Magneto emerges. He forms the sphere into a bullet shape and hurls it at the dome. When the sphere shatters he starts to pull tanks, Jeeps, anything that he can reach to throw at it. When none of that works either, he starts to drag satellites out of orbit. They begin to break up on re-entry and catch on fire. What's left of them plunge past him as massive fireballs, but even they fail to damage the dome in anyway. Apocalypse emerges from the top of the dome just in time to divert the final satellite back towards Magneto. Magneto is able to dodge it just in time, but Apocalypse uses his powers to jerk Magneto about. Magneto screams as he's flung about powerless. Bands of colors and static form, then close about him until he seemingly implodes. Then there's nothing.

The X-Men are shocked and watch speechless as Apocalypse slowly descends back into the dome, sparing Xavier one disdained look on the way. At a gazebo on a cliff, overlooking the ocean, Kurt waits with Mystique. Agatha appears out of the darkness and Kurt asks if there's anything she can do to help his mother. She examines Mystique briefly and tells him that there's nothing she can do, but that Rogue can. Kurt is shocked to see Rogue and asks what she's doing there. Agatha explains that only Rogue can help Mystique. Mystique's own morphing power has been turned against her and trapped her in the stone mutation. By touching Mystique, Rogue can absorb the mutation and release her long enough to free her own powers. Rogue is against it; but Kurt tries to talk her into it. He tells her it's the right thing and if she doesn't help Mystique now it will haunt her for the rest of her life. Rogue approaches Mystique hesitantly. She looks at her hands, but suddenly she becomes furious and shoves the stone Mystique as hard as she can. Mystique falls against the rails and they break, sending her flying over the edge of the cliff. Kurt jumps after her and ports, but he misses. Mystique slams against the cliff face and shatters. Kurt ports to the beach below and collapses by the pieces, devastated. Up above Rogue sobs as she looks over the cliff and then turns and walks away.

Retrieved from "https://marvel.fandom.com/wiki/X-Men:_Evolution_Season_4_1?oldid=4723569"
Community content is available under CC-BY-SA unless otherwise noted.