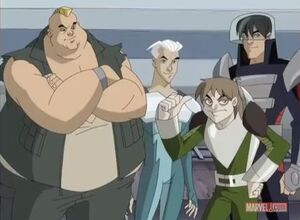 According to this poll, the Brotherhood bys have a higher opinion rating than the police chief!

Appearing in "No Good Deed"

Synopsis for "No Good Deed"

The Brotherhood are riding on a subway train. Wanda is upset about Magneto's death and she's furious that the X-Men stood by and did nothing to help him. Pietro tries to talk to her and tell her that Magneto wasn't the loving father she remembered, that she really hated him. Wanda freaks out and her powers go haywire and derail the train.At Bayville High, Scott and Kit see the flames and head over to help. Meanwhile the Brotherhood are trapped in the subway car with no exit. Pietro tells Fred to make them a door and Fred takes off running, knocking holes through the train as he goes. The rest of the Brotherhood follow him. Lance hesitates as they pass some of the other passengers and then tells them they're going to get out.Up ahead Toad sees a wallet lying on the floor and stops to pick it up. He's waylaid by an old man who begs him to help him. Toad tries to get away, but the man latches onto him and Toad hops away with the guy on his back. As Lance leads the other passengers out he hears an old lady calling for help. Her wheelchair has been wrecked and she's helpless. He goes back for her.

The rest make it up to the street and Toad is finally able to kick off the old guy. The guy hugs him saying that he owes Toad his life. Toad tells him that his wallet will do. As the firemen and rescue workers arrive the subway starts to explode. Lance and the lady he's carrying barely escape ahead of the explosion. The media jump all over the story, calling the Brotherhood heroes. The X-Kids stand by speechless.On television, Principal Kelly has a campaign commercial airing where he's running for mayor. He's running on a strict anti-mutant platform, calling for registration of all mutants. The commercial is interrupted with breaking news of the Brotherhood heroics. Kelly is not happy.Next morning at Xavier's, the X-men are disgusted over the media's portrayal of the Brotherhood as heroes. At the Brotherhood house, they're overrun with reporters and Pietro tries to get Wanda to talk to them, but she's upset over causing the accident in the first place. The lady that Lance saves shows up to give them a $10,000 reward and since she owns the largest construction company in Bayville she's going to fix up their house. The Brotherhood quickly realize that being heroes can be very profitable.

Lance is hesitant at first about helping, but Pietro tells them that the X-men have to be hating it, so Lance quickly agrees. The Brotherhood go about setting up fake accidents and then saving people from them. They continue to get media coverage and praise. Meanwhile Xavier catches on to their little scam and the X-Men start trailing the boys.The Brotherhood hear Kelly on the radio condemning all mutants. They head over to his campaign HQ and wreck the place. When Kelly shows up they tell him to leave them out of his anti-mutant campaign or else. The X-Men and New Mutants all show up to run them off. Kelly isn't appreciative at all though and swears that he's going to run all mutants out of Bayville. At home, Lance is furious. Pietro says that they X-Men can wait they have bigger problems. Seems they've been bumped off of page one. They decide it's time to remind the public how much they're needed. Pietro talks to Wanda about the X-Men teaming up on them, tells her that they're not going to be happy until they see them all go down.

Next day at the zoo, the Brotherhood are performing a ribbon cutting ceremony. The X-Men stand by in the back watching. As Pietro makes his speech turning the public against the X-Men, Wanda hexes their powers. Chaos ensues. The X-Men try to rescue the bystanders, but Wanda continues to hex them and everything they do backfires. Later, the X-Men show up in jail. As Kitty phases through her cell to stick her tongue out at the guard, Xavier calls her down. She says that they can't hold them and Xavier tells her that they're all staying put until he can get things straightened out.Back at the Brotherhood house, the boys want to quite while they're ahead. But Pietro talks them into doing one more rescue, something big so they can go out with a bang. He sabotages a train and it loses all control. When the Brotherhood show up to save the day they find out that the train is now on a collision course with another train, one that is pulling eight tankers of gasoline. Pietro says he'll see them outside of the blast zone and speeds away. Toad and Blob pile into Lance's jeep and take off. Lance stays behind.

Xavier shows up to get the X-Men. He tells them about the Brotherhood going too far and that they've created a crisis situation. The authorities can't do anything and have asked for their help. Kurt, Scott, and Kitty phase onto the train, they lead the conductor to the second car and Scott blasts the connector and frees the rest of the cars from the engine. As the cars slow Kurt looks around and realizes that Kitty's missing.Kit phases on top of the engine and waits. Jean is able to stop the first train (carrying the eight tankers of gasoline) and races to the engine to try to stop it. Kurt ports in and asks Kit what she's doing. She tells him that she's going to phase the engine through the train. He tells her that she can't, it's too much. She says that she has no choice, Jean can't stop them in time.Jean pulls back as the engine nears the train. Kit phases the engine, but about half way through the strain is too much and she loses it. Kurt ports them away as the engine solidifies and the two trains collide. A massive explosion occurs and Jean encloses it with a telekinesis bubble. As more of the engines explode, Jean is straining to control it but it's quickly becoming too much for her.As Jean is about to lose control of the fire, Lance arrives at the scene. He collapses the ground beneath the trains, burying them in the ground just in time. The fire is extinguished. The X-Men gather around Lance; ashamed and depressed, he tells them that it was the last of the heroics and walks away. Later on the news, the X-Men have been cleared of all charges, but the Brotherhood are now under investigation. Men show up at the Brotherhood house to take back all of their new stuff. However, Lance watches on with an accepting gaze. Everyone is pretty dejected. Pietro asks if they want to go into town on the new subway train and they all turn on him.

Retrieved from "https://marvel.fandom.com/wiki/X-Men:_Evolution_Season_4_2?oldid=4833899"
Community content is available under CC-BY-SA unless otherwise noted.