"Sins of the Son" 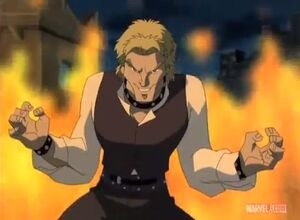 Episode Title
"Sins of the Son"

Sometimes. Sometimes not. Very vexing actually. But no that I'm here, I'd like a little quality time with my Dad! Let's bond shall we? What do you think, Daddy? Am I a chip off the old mutant block or what? But what do you care, right? You were so busy taking care of other people's freaks that you never had time for our own. Well, take a good look Professor. I hope you're proud. 'Cause you made me what I am today!

Appearing in "Sins of the Son"

Synopsis for "Sins of the Son"

In some castle ruins in Scotland, some punk kids are hanging out, having a party. A guy named Lucas wanders through seems he's a popular guy. As he heads down into the remains of the castle, he uses telekinesis to open doors and grates. He reaches the dungeon and talks to someone we can't see. He tells them that if they want it to be over then they have to call "him". Xavier answers the phone and a boy on the other end tells him he needs his help, and calls him father. On the jet to Scotland, Xavier tries to argue with his ex-wife as discreetly as possible about the son that she never told him existed. At the Institute, Beast rushes the New Mutants off to school and then checks in on Kurt and Kitty who have the flu. Kurt's sleeping, but every time he sneezes he 'ports about the room. Kitty can't sleep because she's having nightmares about being at school in her pajamas. Back on the jet, Xavier finally breaks down and tells Jean, Scott, and Storm about his ex-wife, Gabrielle Haller, and how they were only briefly married. They had a son together, but she never told him about David, and now he's been kidnapped. They reach the Haller house and Xavier jumps all over Gabrielle. She tells him that she never told David anything about him, except that Xavier abandoned them before he was born. They argue back and forth, but they're not getting any closer to finding David. Meanwhile outside, Lucas is spying on them through a window. He looks up to see Jean standing in a window above.

Jean and Scott search David's room. Jean notices a little boy in the hall and they go after him. Gabrielle tells them that his name is Ian and David found him on the street and brought him home, but Ian doesn't talk. Jean follows him outside to see if she can reach him with her telepathy. As she follows him across the lawn she runs into Lucas and he takes her out rather easily with his telekinesis. At the institute, Kitty runs out of tissues and goes in to get some from Kurt. She finds him sleeping under the bed and grabs his tail to pull him out. Suddenly he sneezes and ports them both to front entrance of the school. Kitty freaks out because now she's at school in her pajamas. She starts shaking him, begging him to get them out of there before someone sees them. Before she can finish the sentence he sneezes again and ports them into a classroom on a desk. All of the students stare at them and Kit blushes. She drags Kurt by the tail through the school, but he sneezes again and dumps them down town where Kitty is drenched by a passing car. Jean is brought back to the castle and Lucas introduces himself. Jean tries to push him with her telekinesis, but he knocks her flat again with his own, proving he's much more powerful. He tells her he can make her stay, he can do whatever he wants, but she'll stay so she can find David. Scott heads up to the castle looking for Jean. Xavier and Gabrielle search for Ian. Scott finds Jean at the castle and she tells him about Lucas. He goes all macho and the three end up fighting. Jean and Scott get their butts kicked. Scott is chained to a wall; Jean is dumped in the dungeon. The others find Ian and Xavier is able to read just enough of his mind to know the others are at the castle. Jean escapes her cell and finds David. The break out and search for an exit. David explains to Jean that Lucas is really after Xavier. He wants to go against Xavier "brain to brain".

The others arrive at the castle and free Scott just as Jean and David get out. Gabrielle introduces David to his father, but as they shake hands David morphs into Ian. Everyone is shocked and confused. Ian then morphs into Lucas and knocks everyone away but Xavier. Lucas goes off on Xavier for never being there for him and tells him that he's what he is today because of Xavier. He starts ripping the castle apart. Suddenly he loses control and morphs back into David. David warns Xavier that Lucas is after him. Xavier tells David that he can help him to control Ian and Lucas. He goes into David's mind and easily defeats the other two. He encases them in bubbles, but the bubbles merge and begin to absorb David. Xavier grabs his hand and tries to pull him free, but he loses him. In the real world, David morphs into Lucas. Lucas tells them that Xavier has done exactly what he brought him there for. Xavier has sent Ian and David away and set Lucas free. Lucas flies away as the others stand by speechless. They return to the institute and Xavier is quite upset and leaves the group. Beast tells them that he hasn't heard a peep from Kit and Kurt all day and they must be very well rested by now. In Kurt's room, the two suddenly appear. Kurt sits up yawning and saying how he feels so much better. He looks over and Kit is standing beside his bed. She's a muddy mess, covered in twigs and leaves. She starts beating him with a pillow. Storm tries to comfort Xavier about Lucas/David. She tells him that someday Lucas will find his way back and Xavier will be there for him, just as he always has been for them.

Retrieved from "https://marvel.fandom.com/wiki/X-Men:_Evolution_Season_4_4?oldid=5225073"
Community content is available under CC-BY-SA unless otherwise noted.