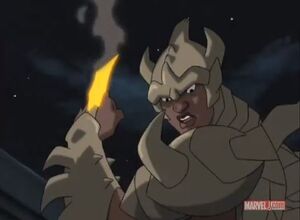 Hiding in sewers, eating garbage, and still we're hunted? Tell me, Callisto, what chance have they got if I don't?

News report, Apocalypse has erected another dome, this time in the Shansi Province of China. A mother walks in and flips off the television, telling her son Dorian that she doesn't want him watching the mutant reports. They upset him too badly. The little boy is small and greenish looking with warts on his face. He flips the TV back on as soon as she leaves the room.A reporter is interviewing Duncan Matthews, who it seems has graduated along with Jean and Scott and is now working in a mining camp. He tells the reporter that mutants will do whatever they want, whenever they want and they all need to be shut down before they cause real trouble.

At a café, a boy dumps the trash into the dumpster. Lucid sneaks out of the sewers and breaks into the dumpster to get to the food. Some teenage jerks see him and chase him into an alley. As they close in around him, getting ready to beat him, Spyke shows up and tells them to leave Lucid alone. Spyke's mutation has continued to evolve and now his entire upper body is covered in bony armor. He can also fire up his spikes. Spyke kicks the punks' butts and they all run off. Lucid follows him back into the sewers where they give the food to all of the Morlocks. Callisto confronts Spyke about angering the topsiders. He tells her that they're already eating garbage and hiding in the sewers and they're still hunted. What chance will they have if he doesn't lead them into battle?

Beast and Xavier continue to research Apoc's domes. The pyramids are completely surrounded by the energy spheres. Any attack against them is multiplied and repulsed back violently. The military in China is getting ready to attack, and the results could be catastrophic. They also fear that the result will cause an anti-mutant backlash.Sam and Amara are walking home from the library. Sam accidentally cannonball's into a building causing a bit of damage. Duncan and his friends start hassling them about being mutants and having to "pay" for the damage. Spyke comes to the rescue again and sends Sam and Amara home. He causes some damage to Duncan's car, but Dunc and his friends seem too afraid to face him in a fight. As he leaves, Spyke tells Duncan to spread the word that Bayville Mutants are off limits to hate crime. He drops back down into the sewer, firing off a couple more flaming spikes that total Duncan's car.Xavier sends Wolverine down to talk to Spyke. Storm wants to go, but Xavier feels that it would be best for Logan to talk to him. The Chinese government attacks the second dome and the results are horrific. The dome remains untouched, but everything for miles around is vaporized. Fury releases Trask under orders. He tells him he's to reinstate the Sentinel program. The government wants to be ready for the escalating mutant threat.

Wolverine talks to Spyke, but it doesn't do much good. Spyke tells him that the Morlocks don't get to live in a mansion, that they are defenceless. He tells him that they need a guardian and that's him.Later in a grocery store, Dorian is having severe headaches. Spyke shows up to buy some groceries, but the shop owner refuses to serve him. As he's leaving the store, a woman snatches at Dorian, telling Spyke to "take this one with you". Dorian's mother tries to deny that he's a mutant. She tells them that he's just sick. The customers get angry and go after the boy. Spyke saves them and then throws money on the counter and leaves with his groceries.On the news, the anti-mutant backlash that Beast and Xavier feared has come to pass. Duncan tells the reporters about Spyke trashing his car and how the Morlocks live in the sewers. Meanwhile, police try to disperse mobs congregating outside of the Institute and Brotherhood house. Duncan and his buddies get some of the high-tech mining laser they use at work and go after the Morlocks. Leech tries to talk to his mom about the possibility that he's a mutant, but she doesn't want to hear it. As Spyke tries to fight off Duncan and crew, a news chopper arrives and Dorian sees them on TV. He leaves the house. The Morlocks and X-Men come to help Spyke. Jean and Duncan face off and when he mouths off to her she slams him into a car. Everyone is distracted when a police chopper arrives and Duncan has a clear shot at Spyke. As he's about to fire, Dorian walks in between them. Duncan fires anyway. Spyke jumps in front of Dorian and is hit. Dorian (Leech) freaks out and screams. As he collapses a wave seems to swell outwards and all energy in it's path is nullified, including mutant powers.

Spyke loses his armor, Jean drops from the sky, Cyke can take off his visor, and the choppers drop onto nearby roofs. Duncan and his buddies are now weapon less and they try to sneak off, but the cops get to them first. Mrs. Leech arrives and Leech tells her that the headaches are all gone. She's mad at Spyke for exposing her son as a mutant, asks what chance does he have now at a normal life. As she drags him away the power comes back on, and Spyke's armor reappears.Duncan and crew are arrested. Storm begs Evan to come back to the X-Men, but he tells her that the Morlocks need him. As he climbs back into the sewers she tells him that she's proud of him. Xavier catches up to Mrs. Leech and tells her that Dorian is welcome at the Institute whenever he's ready.

Retrieved from "https://marvel.fandom.com/wiki/X-Men:_Evolution_Season_4_5?oldid=4949423"
Community content is available under CC-BY-SA unless otherwise noted.