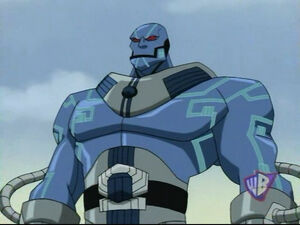 The future came to me in that craft. I have embraced it and merged with its technology so I may lead the evolution of the human race.

Appearing in "Ascension - Part I"

Synopsis for "Ascension - Part I"

Another domes appear in China (although the X-Men discovered it was a sphere). Mesmero is captured by the x-men to acquire knowledge about Apocalypse, Xavier and Storm then travel to Egypt to talk to Apocalypse. Jean Grey tries to stop them but fails. Apocalypse tries to murder Xavier with his powers but Storm interrupted him and also got murdered. Everyone, in the mansion, is sorrowful, then Nick Fury drops by and tells them to bring up a visual on the Sphinx, where they see three Sentinels attacking it(Also three attacking each pyramid). Then Apocalypse destroys the sentinels near the Sphinx and brings back to life Charles Xavier, Storm, Magneto and Mystique and forces them to be his four Horsemen. Apocalypse sent out his horsemen to defend the pyramids while Mystique stays to guard the Sphinx (Xavier protects pyramid in Egypt, Storm in China and Magneto in Mexico). The sentinels were destroyed and the X-men are down to one option, Mutants.

Retrieved from "https://marvel.fandom.com/wiki/X-Men:_Evolution_Season_4_8?oldid=5225074"
Community content is available under CC-BY-SA unless otherwise noted.