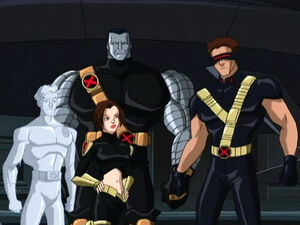 Thanks to you all, we have averted catastrophe. It was not without its price, however. But steel is forged through fire, and like it we have been made stronger. We are prepared for what the future brings. I know this, because I have glimpsed into the mind of Apocalypse. Many challenges still await us. But I have seen some who were our enemies become friends. And with a heavy heart, I saw the dearest of friends, become the most terrible of enemies. I saw my X-Men grow and change and and of course, I saw that some people never change. But one thing was clear that no matter what awaits us, terrible or wondrous... my X-Men will always be there, ready. And of that, I am proud.

Apocalypse, after gaining control over the four most powerful mutants on Earth, enters the final stages of his mission to wipe out all of humankind.

The series ends with a speech by Charles Xavier, who had caught a glimpse of the future while being controlled by Apocalypse. The following future scenarios were foreseen:

Retrieved from "https://marvel.fandom.com/wiki/X-Men:_Evolution_Season_4_9?oldid=5222671"
Community content is available under CC-BY-SA unless otherwise noted.