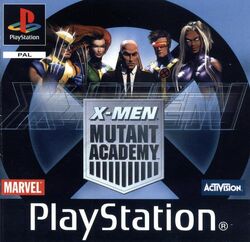 There is no story for this game. It is a "beat-em-up" game with 1-vs-1 player style fighting in the "street Fighter" and "Mortal Kombat" genre. There were cutscenes and a different ending sequence played out for each character after completing the game with them.

X-Men: Mutant Academy was made in the old "6-button" vein (like the original "Street Fighter" arcade game.

Like this? Let us know!
Retrieved from "https://marvel.fandom.com/wiki/X-Men:_Mutant_Academy?oldid=5653466"
Community content is available under CC-BY-SA unless otherwise noted.