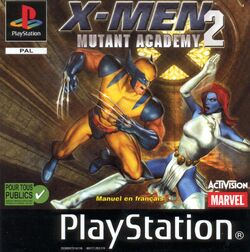 There is no story for this game. It is a "beat-em-up" game with 1-vs-1 player style fighting in the "street Fighter" and "Mortal Kombat" genre. There were cutscenes and endings for each character upon completion of the game for each character.

X-Men: Mutant Academy 2 is a fighting game, the sequel to X-Men: Mutant Academy. Both feature the X-Men in a 3-D fighting arena similar to Mortal Kombat 4. Like its predecessor, the game allows the player to select from several heroes and villains and includes many of the signature moves from the comic. The game also includes a behind-the-scenes look at the X-Men film concept sketches, costumes and other similar material.

Like this? Let us know!
Retrieved from "https://marvel.fandom.com/wiki/X-Men:_Mutant_Academy_2?oldid=5752892"
Community content is available under CC-BY-SA unless otherwise noted.