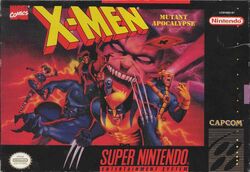 The X-Men must rescue mutants from captivity in the Genosha island complex. Each X-Man has a specific mission he or she must accomplish. Professor X issues an order which the X-Men must complete to finish their missions, but the levels may be played in any order. After that, Apocalypse (and later, Magneto) appears with the intention of destroying Genosha.

X-Men: Mutant Apocalypse is a action-adventure game developed and published by Capcom released for the Super Nintendo (Super Famicom in Japan). In this case, the missions are shared by all characters (not specific) and the player can choose which X-Man is best suited for the current mission.

Retrieved from "https://marvel.fandom.com/wiki/X-Men:_Mutant_Apocalypse?oldid=5592493"
Community content is available under CC-BY-SA unless otherwise noted.