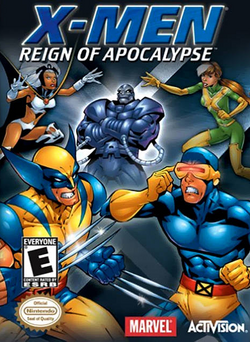 Returning from a mission that took place on the Mojoverse, the X-Men found themselves inside a space-time portal that led them to the X-Mansion. However, they discovered that they were in an alternate universe ruled by Apocalypse. They quickly find a corpse that looked and smelled identical to Cyclops. Before they could understand the events, they were ambushed by a pack of Sentinels, and later, the Blob, who refused to talk to them after suffering defeat.

However, Rogue discovered the X-Men of that universe had made their way to Department H. They travel there only to be attacked by Cable. Weapon Omega, an evil, alternate version of Alpha Flight who serve Apocalypse, also attack the X-Men until they are confronted by Sabretooth and Gambit. The X-Men defeat the pair and travel to the regional Sentinel headquarters in Colorado.

On the way to Colorado, Phoenix attacked the Blackbird, but was defeated by the X-Men before she could destroy the jet. At the facility, the X-Men fought Juggernaut and several Sentinels. The X-Men realized they needed Forge's assistance, but learn that he's in an underwater chamber with Magneto. They storm the base and battle several Acolytes and Sentinels until they found and defeated Magneto himself. There, they found Forge, now known as Genesis, who had been forced to create warp gates for Apocalypse. He agreed to help the X-Men.

Their next destination was the Hellfire Club. They battled their way through waves of henchmen, Nightcrawler, and Psylocke. Then, they flew to San Francisco only to discover it had been turned into a prehistoric wasteland controlled by Sauron and Beast.

After destroying enough warp points, the X-Men made their way to New York City to cut off Apocalypse's communication. There, they defeated Colossus and several other minions from the Acolytes and Hellfire Club. Finally, they headed to Genosha to destroy Apocalypse's cloning bank. They defeated the guard, Silver Samurai, and opened a portal back to their dimension. However, after learning that Apocalypse had been using humans as fuel, the X-Men decide to stay to defeat him before returning home.

On the Golden Gate Bridge, the X-Men battled Archangel and Bishop. Defeating both former X-Men, the team causes the bridge to self-destruct. Believing themselves successful, the X-Men enter the warp to return home only to find themselves on the moon. They battled their way through hordes of enemies, including Pyro, to battle Apocalypse and end his tyranny in that dimension.

Like this? Let us know!
Retrieved from "https://marvel.fandom.com/wiki/X-Men:_Reign_of_Apocalypse?oldid=6462139"
Community content is available under CC-BY-SA unless otherwise noted.