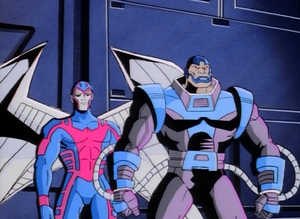 The old world passes away; together, we shall forge a new one in fire and blood! The future is transformed! I am the instrument to purify the world! The evil of human and mutant must be cut away! You shall help my tear down the old order! Those who oppose me shall perish through my agents of destruction... From the ashes of this world, I will build a better one!

Appearing in "Come the Apocalypse"

Synopsis for "Come the Apocalypse"

The immortal mutant Apocalypse turns mutants who journey to Muir Island seeking the fictitious cure into the Horsemen of Apocalypse – Famine, Pestilence, War, and Death. The Horsemen start destroying everything across the planet. The X-Men arrive and battle the Horsemen. Rogue eventually grabs Archangel and absorbs his evil powers. Archangel, appalled at what he has become, blasts the other Horsemen away. Apocalypse flees in a spaceship, and the diversion allows the other Horsemen to escape as well.

Angel undergoes Dr. Adler's treatment, before realizing that the "Dr. Adler" is actually Mystique. Apocalypse shows up and tells Mystique that she will be rewarded for her loyalty. Various mutants wait for their treatment in the local pub. Xavier and some of his X-Men discuss why mutants might not want their powers. Warren Worthington III enters the pub and announces that he has been cured of his Angel mutation. Cyclops tries telling Warren that there is nothing wrong with being a mutant. Rogue says it is up for each mutant to decide.

Apocalypse watches security footage from the pub, revealing that Mystique is impersonating Angel. The real Warren Worthington says that Worthington is no more, that there is only Archangel. Apocalypse introduces his new team of slaves, Famine, Pestilence, War, and Death (aka Archangel). Apocalypse says he will build a better world from the ashes of the current one and sends forth is Horsemen to spread chaos.

Rogue and Gambit play a game of pool. Gambit says the winner gets a kiss from the loser, but Rogue does not like the prospect of draining anyone's energy. Storm turns on the television to view the World Peace Conference in Paris. The Conference Chairman brings up the matter of if they could disarm if mutants live among them. Apocalypse shows up and disrupts the conference and brings in his Horsemen. War and Archangel take down the French army.

Professor Xavier sends everyone in his X-Men group to look into the Apocalypse threat. However, he gives Rogue and Jubilee the mission to return to Muir Island as he recognizes the members of the Horsemen as the mutants who were waiting to be cured there. The Horsemen spread chaos throughout the land; Famine gets rid of people's food, War turns their weapons against them, Death destroys a dam. Rogue asks Dr. Adler about his treatment. Mystique reveals her disguise when Rogue straps her to the treatment machine. Mystique tells Rogue about Apocalypse's plans to use the treatment to make his slaves. Rogue lets Mystique go, but Mystique turns on her and tries to trap her. Rogue escapes from the exploding building.

The rest of the X-Men deal with Pestilence. Storm creates fog to cause her enemy to fall off her horse. The rest of the Horsemen recover Pestilence, and the X-Men follow them to Apocalypse. Rogue flies to Stonehenge, where Mystique said Apocalypse's base is. Apocalypse prepares to exterminate Rogue, but the Horsemen interrupt him with the news that the X-Men have defeated them. Just then, the X-Men show up and battle Apocalypse's forces again. Rogue takes Archangel's powers. Archangel tells his Horsemen to stop the destruction and turns on them. Apocalypse escapes through a large jet hidden underneath Stonehenge and three of the Horsemen fly away. Rogue realizes she has absorbed the evil part of Archangel. Archangel flies off in his own direction.

Retrieved from "https://marvel.fandom.com/wiki/X-Men:_The_Animated_Series_Season_1_10?oldid=5223315"
Community content is available under CC-BY-SA unless otherwise noted.