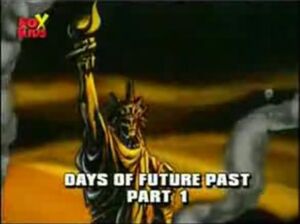 The assassin? The X-Men? Oh, man! The X-Men are the assassins, and I've come back to stop 'em.

Appearing in "Days of Future Past - Part 1"

Synopsis for "Days of Future Past - Part 1"

In a dystopian future, a mutant Tracker named Bishop hunts other mutants for the ruling Sentinels. When he reaches his quota, however, the Sentinels turn on him. With help from the mutant rebels, he travels through time back to the present in order to stop a member of the X-Men from assassinating someone. However, he cannot remember who the assassin is, and sets out to kill the X-Men. Wolverine subdues him and Professor Xavier scans his mind with Cerebro. The super-Sentinel Nimrod follows Bishop back in time, and the X-Men unite to fight it off. Bishop destroys its temporal transceiver, sending it back to the future. Bishop remembers that Gambit is the assassin, drawing his gun and firing.

In a dystopian future in the year 2055 AD, Wolverine and two unnamed mutants battle the Sentinels. A mutant Tracker named Bishop attacks the three mutants and takes them to a mutant termination center. Wolverine tells Bishop that the Sentinels want to kill all mutants, not just the rebels. Bishop shrugs this off, saying they treat the rest of the mutants just fine. However, when the Sentinel informs Bishop that he has reached his quota and is no longer needed.

Wolverine and Bishop carry the two mutants into the center, escorted by a Sentinel. Wolverine notices the graves of the former X-Men. The two mutants take down the Sentinel and Wolverine finishes the job. The super-Sentinel Nimrod flies into the scene. The female mutant reminds Wolverine of the mission and urges him to go. Bishop and Wolverine arrive at a rebel hideout, where they meet Forge.

Wolverine plans on using the temporal transceiver to go back in time to the '90s to stop an assassination. Forge says the rebels have a theory that if the assassination never occurred, then the dystopia would have never happened. Bishop volunteers to go instead, and Forge backs him up. The Sentinels and Nimrod attack the hideout as Bishop goes back in time.

Bishop finds himself in an alley and soon learns that the time travel worked, although he can not remember much about his mission. Rogue and Gambit visit Beast in his jail cell. Gambit says he does not understand how Beast can stand living in a cell. Bishop studies his transceiver and deduces that he must have been sent back in time to stop the assassins, the X-Men. Bishop steals a bus and drives it into the X-Mansion and starts attacking Storm and Cyclops. Wolverine stops Bishop and prepares to kill him. Professor Xavier stops him and scans Bishop's memories of the future. The X-Men, especially Wolverine, do not trust Bishop's story at first.

The transceiver warns Bishop that something has come back through the time portal. Bishop and the X-Men investigate the residual energy from the portal and encounter Nimrod. The Super-Sentinel attacks the group. Jean and Jubilee try combining their powers to attack Nimrod, but he attacks both of them. Storm summons the elements and freezes Nimrod's super structure. The rest of the X-Men attack the Super-Sentinel, making it fall into pieces. As Nimrod reassembles, Bishop takes out its temporal transceiver, making it go back to the future. The X-Men gather and discuss who the assassin could be. Rogue and Gambit return, and Bishop remembers that Gambit is the assassin. Furious, Bishop draws his gun and fires.

Other graves are seen, but the inscriptions cannot be discerned.

Retrieved from "https://marvel.fandom.com/wiki/X-Men:_The_Animated_Series_Season_1_11?oldid=5307781"
Community content is available under CC-BY-SA unless otherwise noted.