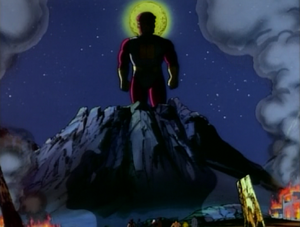 Ladies and gentlemen, I know from my own experience that mutant powers can be dangerous. But we must not forget that mutants are human beings. We must be careful that in controlling mutants who abuse their powers, we do not oppress those who would use their powers for good of all humanity.

Appearing in "The Final Decision"

" You're all fools... Heroic fools" (Magneto to The X-Men after leaving to stop the Sentinels)

" Are you coming? Or is this your day off " (Cyclops to Wolverine and Gambit)

Synopsis for "The Final Decision"

Magneto brings Senator Kelly to a sunken ship to kill him, so that mutants and humans would go to war. Sentinels attack Magneto and take Senator Kelly to Master Mold. Master Mold wants to replace all the world leaders' brains with computers, so that Sentinels could control the world. The X-Men go to the Sentinels' base and save the Senator. Kelly realizes that some Mutants can be good. Cyclops and Jean become engaged.

Magneto brings Senator Kelly to a sunken ship to kill him, so that mutants and humans would go to war. A series of Sentinels made of plastics take Senator Kelly. Magneto uses the metal from the ship to fight off the Sentinels, but they still manage to attack him. The X-Men find the smashed Magneto and bring him to the X-Mansion to recover.

The Sentinels take Senator Kelly to Master Mold. Thankful for being saved the senator agrees with Trask to issue a presidential order putting Sentinels in charge of controlling mutants. A Sentinel does not obey Trask's orders, and Master Mold says he is now giving the orders and wants to replace all the world leaders' brains with computers.

The X-Men locate Henry Gyrich at the Lincoln Memorial and find out about Master Mold's plans to take over the world. The X-Men go to the Sentinels' base and lure the Sentinels outside where Rogue, Storm, and Jubilee keep them busy. The rest of the X-Men sneak underground to save the Senator. Gambit helps Wolverine fight off a large group of Sentinels. The Master Mold tells Trask that since mutants are humans, he should control the humans as well. Jean and Cyclops help the senator escape.

Xavier flies the Blackbird filled with explosives into Master Mold while Magneto shields it from the Sentinel's attacks. They both abandon the plane before it crashes. Kelly realizes that some Mutants can be good and releases Beast from jail. Cyclops and Jean decide to get engaged while having a picnic. Sinister monitors their conversation.

Retrieved from "https://marvel.fandom.com/wiki/X-Men:_The_Animated_Series_Season_1_13?oldid=5223319"
Community content is available under CC-BY-SA unless otherwise noted.