"Night of the Sentinels - Part II" 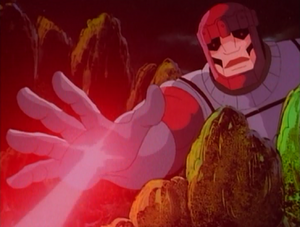 Appearing in "Night of the Sentinels - Part II"

Synopsis for "Night of the Sentinels - Part II"

After breaking into the headquarters of the Mutant Control Agency and destroying the mutant files, the X-Men lose two of their own members in a battle with the Sentinels: Beast is captured and imprisoned, and Morph is killed by a Sentinel. Wolverine demands to go back for them, but is prevented by Cyclops and Rogue - he later vows to avenge Morph's death. Meanwhile, Henry Gyrich interrogates a captive Jubilee at his Sentinel-manufacturing facility in Detroit, Michigan.

The President of the United States - an unnamed woman - publicly announces the X-Men's raid on the "Federal Security Agency" headquarters, and the existence of the Sentinels. Locating Wolverine at a bar, Cyclops asks him to help find the Sentinel's home base. The president orders Gyrich to close down his privately-funded Mutant Registration Programme, concerned that the X-Men might have had good reason to destroy Gyrich's mutant files. Jubilee's foster father calls Gyrich, telling him that Cyclops is in his house, and Gyrich asks him to keep Cyclops at home as long as he can. However, Jubilee's foster father decides to warn Cyclops after his wife tells him the information Cyclops mentioned to her that Jubilee was likely to have been kidnapped by the Sentinels.

A Sentinel attacks Cyclops as the leaves the house. Cyclops fights back, by purposely blasting it's arm off, so the damaged Sentinel could return to base for repairs with the X-Men following it in the Blackbird. They destroy all the Sentinels present and rescue Jubilee, but Gyrich and his manufacturer, Bolivar Trask escape. Jubilee bids farewell to her foster parents, and moves into the Xavier Institute.

Retrieved from "https://marvel.fandom.com/wiki/X-Men:_The_Animated_Series_Season_1_2?oldid=5756418"
Community content is available under CC-BY-SA unless otherwise noted.