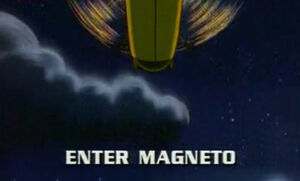 Beast is in prison following the X-Men's raid on the Mutant Control Agency (in the previous episode). He endures the taunts of the ignorant guards, until Magneto arrives to break Beast out of prison. However, Beast refuses to leave, saying that he and Professor Xavier intend to use the upcoming court case to demonstrate that mutants are not dangerous to humans. Magneto leaves, disarming the guards and destroying the tanks and helicopters that gather outside.

At the Institute, Xavier explains to Jubilee that Magneto was once a friend. They had met after "a war", when Xavier worked in a psychiatric hospital and "a dedicated young aide named Magnus" assisted him. Magnus originated from a "small country" that had been invaded during the war, in which he had "lost" his family. When soldiers attacked the hospital and kidnapped a female friend of the two men (perhaps the animated version of Gabrielle Haller), Xavier and Magnus rescued her, thereby revealing their mutant powers. However, Magnus also wanted to destroy the soldiers, but was prevented by Xavier. He left angrily, and started to call himself Magneto. He and a "growing legion of followers" started attacking power plants, factories and government buildings in an attempt to overthrow human society in preparation for a mutant takeover. Xavier stopped him then, but now, several years later, he has returned to begin again. Jubilee is confident that the X-Men can beat him, although Xavier does not seem so sure.

Cyclops and Wolverine attend Beast's trial while anti-mutant protestors riot outside (and inside) the court. The prosecutor moves to deny bail, while Beast's lawyer Mr. Hodge (perhaps Cameron Hodge in his first appearance) claims that doing so would be purely because Beast is a mutant. The judge assures him that he is not prejudiced, and allows Beast to address the court directly. Beast claims that eleven mutants, all recent registrants with the Mutant Control Agency, disappeared prior to his attack on the Agency's headquarters, but he is ridiculed for making accusations against an organization supposedly set up to help mutants. The judge denies Beast's bail, partly because of the violence of Magneto's attack on the detention center. Wolverine wants to spring Beast then and there, but is interrupted by the arrival of Sabretooth, who also seems intent on freeing Beast. The guards take Sabertooth down, but Cyclops steps in to stop them from killing him.

Sabertooth, critically injured, is brought back to the Xavier Mansion and put in the infirmary. Wolverine, who hates Sabertooth for an unrevealed reason, switches off Sabertooth's life support and attempts to take him away. He is stopped by Cyclops, Jubilee, Xavier and Storm. Although Wolverine insists Sabertooth is too dangerous to keep in the Mansion, the others brush off his comments by pointing out that Wolverine himself had displayed similar rages when first brought to the Mansion. An alarm reveals that Magneto is attacking a missile base (identified in the next episode as Drake Missile Base) and the X-Men are sent to stop him. Wolverine points out the hypocrisy in having to fight Xavier's old enemy, but go easy on his.

Magneto activates the launch sequence at the missile base, targeting the base itself, and all the soldiers evacuate. Cyclops, Storm and Wolverine arrive, and Magneto initially assumes they have come to join him until they reveal otherwise. Magneto easily disables the three of them, gives them a message for Xavier and then leaves. The missiles launch and Storm flies off to stop them. With telepathic guidance from Xavier, she short circuits the warheads and blows the missiles harmlessly into a nearby body of water. Their mission accomplished, the X-Men return to the Blackbird and fly away.

Nearby, Magneto comments that the X-Men have been taught well and laments that Xavier has turned against his own kind.

Like this? Let us know!
Retrieved from "https://marvel.fandom.com/wiki/X-Men:_The_Animated_Series_Season_1_3?oldid=6499573"
Community content is available under CC-BY-SA unless otherwise noted.