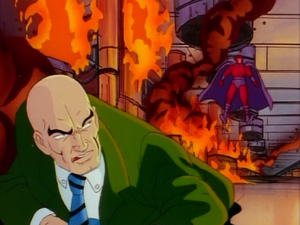 All right, Xavier. You've cast your lot with humankind. But the others will understand. Mutants will come to me by the thousands, and we shall destroy you!

Charles Xavier attempts to find the cause of Sabertooth's great rage by probing his mind, after the mutant was brought to the X-Mansion in the previous episode. Xavier melds with Sabertooth to help him fight his demons, but when that resembles Wolverine attacks, Sabertooth breaks the connection. Xavier withdraws, and it is revealed that Sabertooth is tied down in the Insitute's infirmary.

In Xavier's study, Cyclops, Storm and Wolverine relate to Xavier the events that transpired at the army base. Xavier reveals that Magneto believes that mutants are the next stage of human evolution, from homo sapiens to homo superior. However, he also reveals that he has good news, and leads them to the mission room, where Sabertooth is bound to a chair. Wolverine demands that Sabertooth be sent away, then threatens to attack him. He explains he has been working with Sabertooth, helping him to alleviate some of his rages, although some recesses of his mind still cannot be accessed. Sabertooth seems amused: he reveals that the two of them used to be friends, and even worked together before "some little misunderstandings." Wolverine then claims that Sabertooth "wasted" some friends of his for no reason, hence the hostility. Xavier nevertheless asks for Wolverine's assistance in the next stage of Sabertooth's treatment, but Wolverine refuses, saying that for as long as Sabertooth is in the mansion, he will not be. He leaves. Xavier says that they must now focus on the bigger problem: Magneto, who Xavier predicts will attack again soon.

Sure enough, Magneto soon attacks a Metro Chemical factory with his powers, causing fires and mass panic among the workers. Xavier correctly deduces that Magneto is challenging him, using the workers as bait. He takes the X-Men to face "the Master of Magnetism," leaving Jubilee behind to watch Sabertooth.

At the Metro Chemical factory, Magneto ponders what Xavier will look like after so many years (briefly entertaining the prospect of a toupee) before the X-Men (Cyclops, Storm and Rogue) arrive. Magneto expresses disappointment that Xavier has not come personally. The X-Men's attacks against Magneto prove useless - even Rogue, when she tries to steal some of his power, cannot get close to him. Magneto disarms them all quickly, affecting Cyclops with a toxic gas and collapsing a wall on top of Storm, who is instantly paralyzed by her claustrophobia. With the X-Men disabled, Xavier arrives himself to face Magneto.

Rogue pulls an unconscious Storm out from under the rubble, then finds that Cyclops is not breathing. She gives him mouth-to-mouth resuscitation, successfully getting him to breath, but then she cannot control the powers she has absorbed from him and her eye beams blast a hole in the side of the building. Cyclops, now awake, tells her to shut her eyes, which she does.

Xavier and Magneto talk amidst the burning factory. Magneto offers Xavier one last chance to join him, but Xavier refuses. He asks how Magneto can willingly cause so much destruction after what they have already seen. Magneto answers that, in his youth, his people preferred to talk while others waged war, and they were destroyed for it. He angrily tips Xavier out of his hovering chair and threatens to kill him. The professor uses his telepathy to make Magneto relive painful memories from his childhood. Magneto begs for him to stop, but when Xavier refuses, Magneto flees the factory. Once he is gone, Xavier and the X-Men escape from the burning building.

Senator Kelly holds a press conference, criticizing the President for rescinding the Mutant Registration Act and announcing his candidacy for President of the United States. If elected, he promises to relocate every mutant in the country to internment camps. Henry Gyrich is watching in the crowd. Meanwhile, Jubilee and Sabertooth watch the press conference on television. Sabertooth threatens to kill Kelly, but quickly apologizes to Jubilee for losing control. When she sees that his wrist has been hurt by the shackles, she goes to loosen it for him, but as soon as his arm is free he grabs her. He reveals that he has been faking all his improvement from Xavier's therapy, and that Magneto sent him to the Institute to take it over. Promising to kill her if she does not help, Sabertooth makes Jubilee free him from his restraints, then says he intends to kill her anyway. However, he is prevented when Wolverine shows up to stop him.

Sabertooth and Wolverine fight, but when Wolverine gets the upper hand and prepares to kill Sabretooth, Xavier shows up to stop him and lectures him about revenge. Jubilee explains that Sabertooth was about to kill her. While Wolverine is distracted, Sabertooth uses the opportunity to slash him across the stomach. Jubilee prevents Sabertooth from finishing the job, using her powers to blast him through the wall. Sabertooth flees, and Wolverine is taken to the infirmary. Xavier apologizes to Wolverine for not listening to him, saying that he was blinded by his passion.

Magneto, overlooking a city, says that other mutants will understand his cause and will join him.

Retrieved from "https://marvel.fandom.com/wiki/X-Men:_The_Animated_Series_Season_1_4?oldid=5434511"
Community content is available under CC-BY-SA unless otherwise noted.