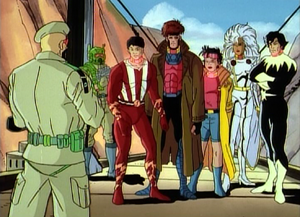 Gambit, Storm, Jubilee and a host of other mutants are made to work as slaves in Genosha to complete a dam which will power a Sentinel factory. Special collars on mutants' necks prevent them from using their powers, but Gambit manages to escape. During his escape, Gambit finds Cable who is looking for the one responsible for enslaving the mutants, the Leader. Cable gives Gambit a key to unlock his collar before attacking the Sentinel factory. Gambit frees the other Mutants, who begin fighting with the guards and Sentinels before fleeing. Storm uses her powers to bring down the dam, causing a flood to destroy the entire factory. The X-Men return home to find the X-Mansion destroyed.

Jubilee, Storm, and Gambit, along with many other mutants, wake up in a detention center on Genosha (having been captured in "Cold Vengeance"). They have been fitted with special collars that prevent them from using their powers, and are being used as slaves to construct a dam. When their collars are switched off to let them use their powers to help with the building, Storm immediately tries to escape (Gambit, realizing the futility of the gesture, prevents Jubilee from doing likewise). The collars are immediately reactivated, and Storm is recaptured by a Sentinel. Bolivar Trask appears and orders Storm killed, but Gambit bargains for her life by revealing that she could easily fill up the lake with her mutant control over the weather. Instead, she is locked in "the Box," which aggravates her childhood claustrophobia.

As the other mutants get to work on the dam, Gambit and the soldiers see a fire in the forest in the distance. Sentinels are sent to apprehend the man responsible, while the guards send the mutants back to their cells. That night, a power failure occurs in the detention center and Jubilee manages to get out of her cell. She has a plan how they can jump the guards and escape, but neither Gambit nor any of the mutants in neighboring cells are willing to listen to her. She returns to her cell as the lights come on again.

Meanwhile, back at the mansion, Wolverine returns from his trip to Canada (again, in "Cold Vengeance"). Scott is upset that they cannot contact their allies on Genosha. The X-Men decide to go to Genosha to check in. Xavier declines to join them, saying he has things to do. Once the others have left, Xavier calls his "old friend" Moira MacTaggert at the Muir Island Mutant Research Center in Scotland.

On Genosha, Jubilee wakes up to find that Gambit was taken away in the night. The other mutants agree to her breakout plan, but it fails when it is revealed that Gambit had informed the guards about her plan. Jubilee is thrown into the Box where she finds Storm, who is now delirious. She promises to make a snow-storm, forgetting that she does not have her powers, and says that Gambit will save them.

In a nearby factory, Bolivar Trask reveals the existence of Master Mold, a self-contained Sentinel production line, to Henry Gyrich, as well as to the leader of Genosha, a former colonel and associate of Gyrich's who now refers to himself as "Leader", and to Cameron Hodge, the "Development Advisor to the government of Genosha." They reveal that the purpose of the dam is to power Master Mold, which is currently drawing too much power from the Genoshan energy grid. They also bring in Gambit, who Gyrich questions about the X-Men. Gambit promises to lead Gyrich to them, and Gyrich sends him back to the prison. However, on the way back Gambit escapes from his guards, and encounters a heavily-armed mercenary named Cable, who is looking for the Leader. Cable drives off the guards and destroys their vehicle. When Gambit asks him to help free the slaves, Cable gives him a key to the control collars that he stole a week earlier.

Elsewhere, Cameron Hodge explains that Cable is apparently an American, and that he was a mercenary in the Leader's army until he discovered that the Leader was not really a champion of democracy. He threw his wages back in the Leader's face and took to the hills. He may also be a mutant. Gyrich offers to have Cable eliminated if Leader will provide large numbers of control collars. Before the deal is made, Cable attacks the factory.

Gambit rescues Jubilee and Storm from the Box, having decapitated the Sentinel that was guarding them. They then attack the dam and Jubilee steals the control for the power-dampening collars, freeing the slaves. However, the slaves refuse to help destroy the Sentinels until they have taken over the whole of Genosha, and they leave.

Cable infiltrates the Sentinel factory and destroys many Sentinels, then tracks down the Leader. Master Mold produces a smaller-sized Sentinel of a different design, which follows Cable and attacks him, allowing Leader to escape. Cable defeats the prototype Sentinel. Storm summons a thunderstorm and heavy rain to destroy the dam and the factory. Although it crumbles, she is too exhausted to fly to safety. She is rescued by the timely arrival of Rogue.

Cable accosts the Leader and Cameron Hodge as they flee the factory, planning to go to Switzerland. He destroys their car. He holds up Leader and Hodge pulls a gun on him, but before they can take any action the flood waters from the dam stream towards them in a huge wave. Cable laughs as the three of them are washed away. Inside the factory, Master Mold attempts to flee the flood, but cannot escape because it is still plugged in. The wave destroys the factory.

The X-Men return to the Xavier Institute, where they find that the school has been completely demolished.

Like this? Let us know!
Retrieved from "https://marvel.fandom.com/wiki/X-Men:_The_Animated_Series_Season_1_7?oldid=6514356"
Community content is available under CC-BY-SA unless otherwise noted.