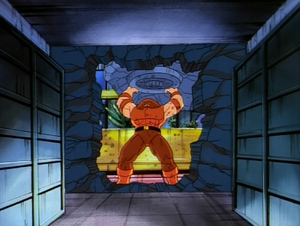 (Absorbs Juggernaut's powers.) Charles, you had it easy. You were the good one! But now I'm the strongest, and I will destroy you and your pathetic X-Men! (Screams.) Agony. Evil thoughts. They love my brother, not me. They love my brother. Must destroy. Must... (Screams and unleashes energy.)

Appearing in "The Unstoppable Juggernaut"

Synopsis for "The Unstoppable Juggernaut"

After the X-Men find the X-Mansion destroyed, the X-Men go looking for the suspect. Jubilee finds a mutant made out of pure steel. Thinking he is the one responsible for trashing the school, Jubilee goes after him, but Wolverine says he was not the one who destroyed the mansion because he smells different. Jubilee and Wolverine find Juggernaut robbing a bank and try to apprehend him, but Juggernaut is too strong. Soon the other X-Men arrive at the scene. Jean explains that she can not mentally attack Juggernaut as long as his helmet is on. Cyclops suggests they work as a team. The plan works, and Rogue manages to absorb some of his powers, revealing why he destroyed the mansion: Xavier is his half-brother and he wants to take revenge because his parents treated Xavier better than him. Jean wipes his mind clean. The X-Men start rebuilding the Mansion.

The X-Men find the mansion destroyed after returning from Genosha (seen in the previous episode). They immediately begin digging through the rubble in search of the Professor, but learn that he left the mansion before its destruction when they find a message that he left behind. By analyzing the rubble, they realize that the person responsible must be very large, and Wolverine goes in search, much to Cyclops' annoyance. Cyclops sends Storm, Rogue and Jubilee to keep an eye on him.

In town, Jubilee discovers a big Russian mutant named Colossus who has the power to turn into steel. She watches him demolish a building and Wolverine saves her from the falling rubble. She is convinced that he must have destroyed the mansion too, and Wolverine initially agrees. The construction workers, angry that a "mutant scab" has stolen their work, attack Colossus - even driving into him with a cement mixer - but he is unphased and slightly confused at their misguided anger. Wolverine and Jubilee attack Colossus, both certain that he destroyed the mansion, but again he brushes them off and seems confused at their hostility. He claims to know nothing about any mansion, and Wolverine finally realizes that he is telling the truth when he realizes that Colossus was not the person he smelled at the mansion's rubble.

When Colossus leaves, Wolverine and Jubilee are called by Rogue to the First National Bank, which is being robbed "by someone big." When they arrive, they find that Colossus has been arrested, even though he protests that he had been opening an account and that he tried to stop the robber. Realizing that Colossus might know something about the real robber - whom Wolverine identifies by scent as the person who destroyed the mansion - Storm and Rogue break into the jail to speak with him. They meet teammate Beast, who is still waiting for his day in court (since the episode "Enter Magneto") and who again refuses to leave the jail. Colossus agrees to escape and knocks down a wall to create a "back door." Storm covers the hole with ice.

Meanwhile, Jubilee and Wolverine discover another bank being robbed by a huge criminal who Wolverine identifies as "The Juggernaut." Tanks and police try to stop him but he easily tosses them aside. Wolverine sneaks up from behind the Juggernaut to tear open the money bags. Jubilee returns the stolen money to the bank. Wolverine confronts the Juggernaut and Jubilee tries to help. Unfortunately, he proves too strong for them, even when Rogue and Colossus arrive to help. He demands to know where Xavier is, claiming that he could not find Xavier at the mansion and resorted to robbing banks to get his attention.

The other X-Men, Cyclops, Jean and Storm, arrive. Jean says she is trying to attack Juggernaut's mind, but that the helmet he wears shields him. Cyclops develops a plan to take Juggernaut down, in which all of the X-Men (plus Colossus) must work together. Rather than taking him on directly, they keep him off balance and disoriented so that they can remove his helmet. Rogue attempts to absorb Juggernaut's power, but it proves too much for her and she also absorbs some of his psyche, revealing Juggernaut's resentment against his half-brother Charles for being "the good one" and the object of their parents' affection. Nevertheless, Rogue's touch weakens Juggernaut enough for Jean to psychically attack his mind with the aid of Cerebro, wiping his mind.

The X-Men and Colossus set about rebuilding the mansion. Wolverine offers Colossus a place at the mansion, but he turns down the offer, saying that he must first find his sister and "maybe see more of America." Wolverine and Jubilee reveal that the mansion feels like home to them, and they determine to find Xavier.

Retrieved from "https://marvel.fandom.com/wiki/X-Men:_The_Animated_Series_Season_1_8?oldid=5223312"
Community content is available under CC-BY-SA unless otherwise noted.