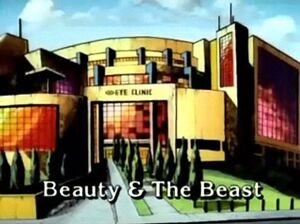 Appearing in "Beauty & the Beast"

Synopsis for "Beauty & the Beast"

The Friends Of Humanity attack a hospital for the blind that Beast is working at. And Wolverine plans on tearing them apart from the inside. Beast and one of his blind patients, Carly, fall in love together. But Carly's father is a mutant hater and won't stand to see them associating with each other. When the Friends Of Humanity kidnap Carly for associating with a mutant, Wolverine, Beast, and the FOH come full circle. Meanwhile, in the Savage Land, Xavier and Magneto are struggling to survive.

Retrieved from "https://marvel.fandom.com/wiki/X-Men:_The_Animated_Series_Season_2_10?oldid=5501640"
Community content is available under CC-BY-SA unless otherwise noted.