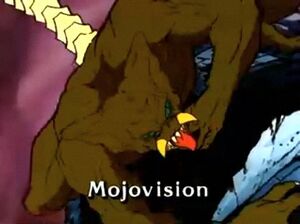 Mojo, a very megalomaniacal, interdimensional network programmer casts the X-Men as his latest all galaxy television hit, when he uses his psychic powers to pit them against one another on a far distant planet. The blood thirsty crowd goes wild and the X-Men's fight to the death will ensure the greedy showman's highest ratings ever.

Retrieved from "https://marvel.fandom.com/wiki/X-Men:_The_Animated_Series_Season_2_11?oldid=5223352"
Community content is available under CC-BY-SA unless otherwise noted.