"Till Death Do Us Part - Part One" 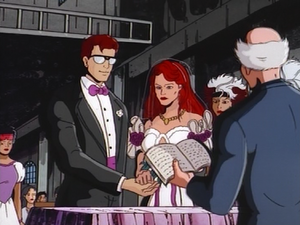 Episode Title
"Till Death Do Us Part - Part One"

They were all my friends. I don't want to hurt them. But why did they abandon me? Why did they leave me to die?... I'll destroy them all. All the X-Men!

Appearing in "Till Death Do Us Part - Part One"

Synopsis for "Till Death Do Us Part - Part One"

Cyclops and Jean get married and Senator Kelly becomes president. Creed spreads anti-mutant protests throughout the country, focusing his interests on the recently pardoned Beast. Morph seeks revenge on the X-Men for leaving him to die. He fakes a distress call, sending Professor Xavier to help Magneto in Antarctica. Morph transforms into various members of the X-Men to cause confusion among themselves as more anti-mutant protests rise.

Wolverine practices in the Danger Room against a robotic Cyclops while the real Cyclops marries Jean Grey. The robot turns into a Sentinel version of Cyclops and attacks Wolverine. As the reverend from the wedding walks outside, he transforms into Morph. At the wedding reception, Jean tosses the bouquet and Beast inadvertently catches it.

When President Kelly had pardoned Beast, Creed started causing mutant by having a mutant attack the area. Morph starts becoming hysterical in his hotel, blaming the X-Men for leaving him to die (in "Night of the Sentinels: Part 2"). A mysterious voice convinces Morph to seek revenge and destroy all the X-Men.

Professor Xavier gets an urgent video call from Magneto, asking the professor to meet him in Antarctica. The video blacks out, and it is revealed that Morph is impersonating Magneto. Gambit and Wolverine play pool at a bar while Beast watches. Suddenly, an anti-mutant mob tears down the bar's wall. Beast disarms one of the protestors, and stops some of them from leaving in a car. Creed gets the battle on video tape.

Professor X puts Storm in charge while he is gone. Jubilee turns on the news, which blames Beast for the riot. As Wolverine leaves, Morph sneaks into the Mansion as Wolverine. He shapeshifts into Rogue and tells Gambit that she actually can touch human beings without absorbing their powers. "Rogue" tells Gambit to meet her in the rec room where the real Rogue is. Morph transforms into Storm and tells Jubilee to take care of an expected "violent anti-mutant attack." Gambit kisses the sleeping Rogue and loses consciousness. As Beast trains in the Danger Room, Morph increases the danger and locks Beast in.

An anti-mutant mob prepares to attack the Mutant Counseling Center, but Storm and Rogue stop them. Morph transforms into a police captain and orders the other policemen to fire at Storm with full energy, knocking her out of the sky. Sinister watches Morph enjoy his revenge on the X-Men.

Retrieved from "https://marvel.fandom.com/wiki/X-Men:_The_Animated_Series_Season_2_1?oldid=5390667"
Community content is available under CC-BY-SA unless otherwise noted.