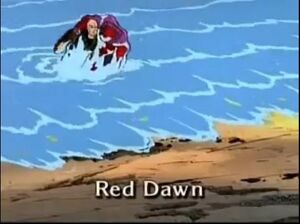 At approximately the 13:20 mark (thirteen minutes and twenty seconds into the episode), while conversing with Colossus about facing off with Omega Red in the past, Wolverine's yellow uniform pants seem to disappear. Lasting a brief three seconds, this angle/ cut shows Wolverine donning a fashionable ensemble of nothing but his mask, gloves, blue skivvies and red belt. Curiously enough, his yellow pants are back on a moment later when the rest of the X-Men team arrive in the Blackbird.

Retrieved from "https://marvel.fandom.com/wiki/X-Men:_The_Animated_Series_Season_2_4?oldid=5223357"
Community content is available under CC-BY-SA unless otherwise noted.