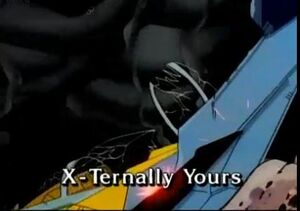 Gambit is forced to return to his southern roots by an ancient tithe, an old family feud and the kidnapping of his brother, Bobby. Bella Donna of the Assassin's Guild uses the kidnapping to lure Gambit into her clutches and force him into completing the aborted marriage. Upon trading Bobby and the tithe for Gambit, Bella gives the Thieves a fake tithe, ensuring their destruction at the hands of the X-Ternal. Fortunately for Gambit, the rest of the X-Men follow him back to the bayou; with Gambit's help they successfully confront the Assassins at the designated place and time and expose their deception. When the X-Ternal comes, Jean Grey forces a telepathic link with the X-Ternal, forcing her to see the truth. Realizing that she had been duped, the X-Ternal takes away Bella's powers, and the X-Men return home.

Retrieved from "https://marvel.fandom.com/wiki/X-Men:_The_Animated_Series_Season_2_6?oldid=5511705"
Community content is available under CC-BY-SA unless otherwise noted.