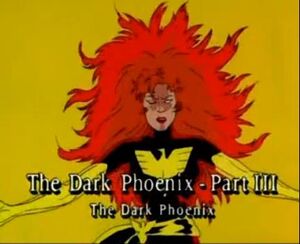 The Phoenix is contained...for now. I could never have defeated the Phoenix if Jean herself had not helped me. The strength of her mind is truly awesome.

Jean Grey, now completely part of the Phoenix, returns to her childhood home, overwhelmed by too much emotion and too much power.

Like this? Let us know!
Retrieved from "https://marvel.fandom.com/wiki/X-Men:_The_Animated_Series_Season_3_13?oldid=6514353"
Community content is available under CC-BY-SA unless otherwise noted.