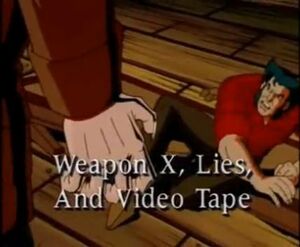 Welcome gentlemen...Welcome to our past...

Wolverine discovers everything about his past life in the government program Weapon X was a lie... including his love affair with Silver Fox.

After Jean Grey's apparent death in Dark Phoenix saga part 4, this is the 1st appearance of Jean. Furthermore no explanation is given to Jean's return. A reason could be that the series neglected to mention that the Jean we saw die was just a clone, as in the comics Jean was cloned several times.

Retrieved from "https://marvel.fandom.com/wiki/X-Men:_The_Animated_Series_Season_3_19?oldid=5742217"
Community content is available under CC-BY-SA unless otherwise noted.