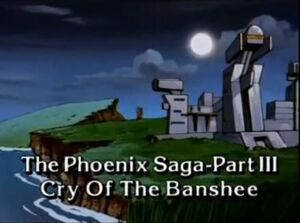 Appearing in "Phoenix Saga - Part III: Cry of the Banshee"

Synopsis for "Phoenix Saga - Part III: Cry of the Banshee"

Juggernaut and Black Tom Cassidy kidnap Lilandra for Erik The Red, but the X-Men track them down. A fight results in a stalemate until Gladiator, guard to the imperial throne, shows up to take Lilandra captive. Phoenix rescues her and vanquishes Gladiator for the meantime.

Like this? Let us know!
Retrieved from "https://marvel.fandom.com/wiki/X-Men:_The_Animated_Series_Season_3_5?oldid=6514350"
Community content is available under CC-BY-SA unless otherwise noted.