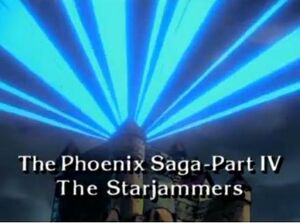 The X-Men fail to protect the M'Kraan Crystal from intergalactic pirates called Starjammers who plan to sell it to D'ken as well as to use Cyclops as an assassin. Phoenix transports the X-Men to the crystal but D'ken succeeds in unlocking its power.

Like this? Let us know!
Retrieved from "https://marvel.fandom.com/wiki/X-Men:_The_Animated_Series_Season_3_6?oldid=6514349"
Community content is available under CC-BY-SA unless otherwise noted.