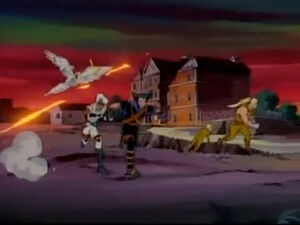 Episode Title
"One Man's Worth - Part I"

This is the mutant we must protect: Professor Charles Xavier, used his powers to bring mutants and non-mutants together. He established a school here, where he and his team of X-Men lived and fought for basic human rights.

Appearing in "One Man's Worth - Part I"

Synopsis for "One Man's Worth - Part I"

In the year 2055, Forge is alerted to a temporal rift in the past, and he sends Bishop and his sister Shard back to the past through his time machine, in hopes to get help from the X-Men. However, when they touch down in 1995, they arrive in a war-torn world, where mutants and ordinary humans are in an endless fight for their respective species' survival. In this alternate reality, it is revealed that Professor Charles Xavier has been erased from the timeline, resulting in this war-torn reality without his efforts to make peace between mutants and ordinary humans.


Bishop and Shard manage to convince Wolverine and Storm, who are husband and wife in this reality, of the changes that resulted in Professor X being erased from history, and the foursome head back to 1959, in an attempt to stop a mutant criminal named Fitzroy and his sidekick Bantam before they can carry out the assassination of the young Charles Xavier. However, in the midst of a small brawl within a local diner, Charles runs out scared after he learns about his future, back toward the college and the school laboratory to think about these things.


Meanwhile, after finishing the brawl, Bishop, Shard, Wolverine, and Storm split up to find Xavier, but they are soon ambushed by Nimrod, the Sentinel from the Future. As Bishop, Wolverine, and Storm engage Nimrod in battle, Shard continues searching for Fitzroy, finding him as he is just leaving the school laboratory. However, she is too late to capture him as he and Bantam escape back through the portal to the future. At the same time, after Wolverine, Storm, and Bishop manage to dismantle Nimrod, the Sentinel escapes back to the future along with the mutant criminals.

Back inside the school lab, Charles has doubts about what he just saw and decides that he could never be capable of such power—but just as he opens the door to exit the lab, Fitzroy's detonator is triggered...
To be continued...

Retrieved from "https://marvel.fandom.com/wiki/X-Men:_The_Animated_Series_Season_4_1?oldid=5502673"
Community content is available under CC-BY-SA unless otherwise noted.