"Beyond Good and Evil - Part 4: End and Beginning" 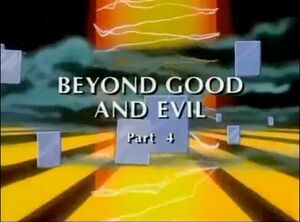 Time is motion...and motion and thought are a unity; two aspects of a single power that is beyond comprehension at all but myself. That is why certain psychics can see into the future...the mind can transcend time.

Appearing in "Beyond Good and Evil - Part 4: End and Beginning"

Synopsis for "Beyond Good and Evil - Part 4: End and Beginning"

Cable & the X-Men destroy the Lazarus Chamber. They then use Cable's computer and Cerebro to track a homing device on the Professor to the control axis where Apocalypse reveals his plan to use the psychics to destroy all time, and recreate a universe, where he will rule unchallenged. Feeling that he was deceived by Apocalypse, Magneto attacks him when Cable arrives and joins the attack. Apocalypse begins draining the psychics which causes time and history to start to disappear. Bishop sees this and releases the psychics. Sinister and the Nasty Boys retreat. Apocalypse and his Horsemen are defeated by the heroes. Using Cable's time-spaceship, everyone else is returned to present time at the X-Mansion. Cable then travels back to his own time.

Like this? Let us know!
Retrieved from "https://marvel.fandom.com/wiki/X-Men:_The_Animated_Series_Season_4_11?oldid=6908736"
Community content is available under CC-BY-SA unless otherwise noted.