"The Lotus and the Steel" 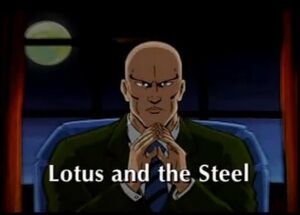 Episode Title
"The Lotus and the Steel"

My true nature? I wish I knew what that was...

Appearing in "The Lotus and the Steel"

Synopsis for "The Lotus and the Steel"

Wolverine, losing control, quits the X-Men and returns to the rural Japan of his younger days, in an effort to find himself. He works peacefully with a former spiritual teacher, the monk Oku, to build a temple. But the neighboring village is about to be attacked by bandits, led by the merciless Silver Samurai, unless payment is made. Some of the villagers want to resist, and ask Wolverine for help. Wolverine is torn. This is just the sort of thing he had wanted to leave behind. Wolverine bests the Samurai in single combat by taking advantage of Samurai's habit of teleporting in behind him: Wolverine anticipates the move and disables the teleportation device, humiliating Samurai.

Retrieved from "https://marvel.fandom.com/wiki/X-Men:_The_Animated_Series_Season_4_13?oldid=5223391"
Community content is available under CC-BY-SA unless otherwise noted.