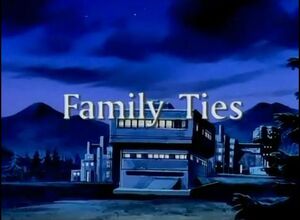 For it is the blood of the father that gives life to his children.

Scarlet Witch, Quicksilver, and Magneto are lured and captured by the High Evolutionary and his New Men. They imprison them along with Wolverine, who was spying on Magneto. The Evolutionary reveals that he wants to use their genetics & powers to create a new breed of beings, which he demonstrates by transforming Wolverine into a werewolf. He also reveals that Magneto is Quicksilver and Scarlet Witch's father. Magento admits to the twins Quicksilver & Scarlet that he regrets abandoning their mother, his wife Magda. Beast and Professor X locate them as Magneto breaks the others free when the High Evolutionary escapes. Wolverine reverts back, and the twins walk away from Magneto despite his effort to reconcile with them.

Retrieved from "https://marvel.fandom.com/wiki/X-Men:_The_Animated_Series_Season_4_17?oldid=5233979"
Community content is available under CC-BY-SA unless otherwise noted.