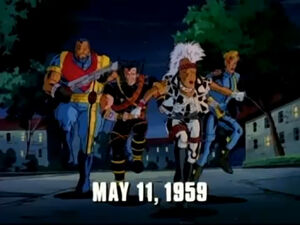 Time-travel, parallel futures, mutants, and assassins...You can't expect me to believe all this!

Appearing in "One Man's Worth - Part II"

Synopsis for "One Man's Worth - Part II"

The four time travelers race toward the lab as it explodes, due to Fitzroy's detonator, but they are too late, as they discovered that the young Charles Xavier was caught in the blast. After evading another battle (thanks to Storm's quick thinking and a whirlwind that suspends a mob ready to attack them), Shard decides that they need to see if they can head back to the future (2055) to ask Forge for help. They indeed succeed in returning to 2055, but find themselves engaged in battle with new Sentinels created by Master Mold, because the Forge of this reality has no memory of who Bishop and Shard are. After making quick work of these new Sentinels, called Enforcers, they convince Forge to re-set the time portal for 1959, but the main mechanism was severely damaged in the fight.

While Forge tries to fix his time portal, Fitzroy informs Master Mold of his apparent victory, but Master Mold berates him for not eliminating the four time travelers who tried to stop him, because now, Master Mold says, if they escape, they will use the time machine to re-set history as it should be. After sending Fitzroy and Bantam to destroy the time portal, he orders Nimrod to eliminate the duo after the portal is destroyed.

Back at the portal site, Forge almost has the portal operational again, but more Enforcers, along with Nimrod, Fitzroy, and Bantam, arrive—but to Bishop's shock, Fitzroy traps Nimrod inside a force field and gives Bishop a message that he says "will explain everything", before he is blasted by one of the Enforcers. Just as the portal becomes fully operational, Shard is injured as she tries to go through it along with her brother. After some encouragement from Shard to finish the mission without her, Bishop, Wolverine, and Storm leap through the portal, back to 1959, just as Nimrod moves in on Shard and Forge to destroy them.

Once back in 1959, Bishop, Storm, and Wolverine play the message from Fitzroy and then manage to intercept Charles Xavier as he is racing out of the diner (because of the brawl that happened in the previous episode). After convincing Charles that he will be destroyed in the school laboratory, Wolverine, Storm, and Bishop make a plan to intercept Nimrod and Fitzroy, but Nimrod ambushes them again and attempts to destroy the time travelers. Bishop manages to target Nimrod's temporal transceiver and destroy it, which sends Nimrod back to the future—but then, Fitzroy arrives with his detonator that destroyed Xavier the first time. Insuring that he will succeed, Fitzroy also traps Xavier and the time travelers within a force field dome, but Storm and Bishop convince him to let them go after Fitzroy discovers that Master Mold will betray and destroy him. After the force field is deactivated, Wolverine throws the detonator out the window, where it harmlessly explodes, restoring the timeline.

With his plan thwarted, Fitzroy drains Xavier's energy, knocking him unconscious, and uses it to travel back to the future, along with Bantam. Bishop uses his temporal transceiver to do the same, and Wolverine and Storm share one last kiss before their own transceivers run out of energy, restoring them to their normal lives and reality.

Like this? Let us know!
Retrieved from "https://marvel.fandom.com/wiki/X-Men:_The_Animated_Series_Season_4_2?oldid=6499621"
Community content is available under CC-BY-SA unless otherwise noted.