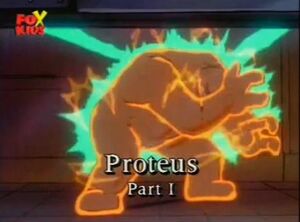 He's down there somewhere. They can't stop me! I'm going to find my father!

Appearing in "Proteus - Part I"

Synopsis for "Proteus - Part I"

The long hidden secret patient of Muir Island, a reality-warping mutant teen known as Proteus, escapes from his 15-year long captivity, and wreaks havoc across Scotland searching out his father.

Like this? Let us know!
Retrieved from "https://marvel.fandom.com/wiki/X-Men:_The_Animated_Series_Season_4_4?oldid=6514346"
Community content is available under CC-BY-SA unless otherwise noted.