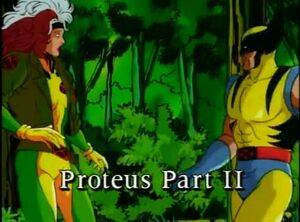 Fascinating! His powers seem limited only by his imagination.

When Proteus discovers that his deadbeat dad is a prominent politician, he storms the Union Hall right in the middle of his dad's campaign speech on 'family values.' Proteus tells his father that he is his son, his father denies it and runs off in horror, crying for help. Angered at his father's reaction, Proteus creates havoc, but Professor X later calms him down, and he stops the rampage. Then he goes back to Muir Island with Moira MacTaggert.

Like this? Let us know!
Retrieved from "https://marvel.fandom.com/wiki/X-Men:_The_Animated_Series_Season_4_5?oldid=6514345"
Community content is available under CC-BY-SA unless otherwise noted.