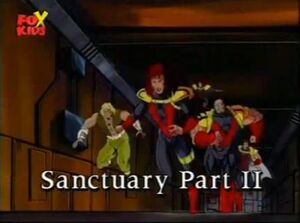 You will serve our cause much better...as a martyr.

As Magneto plummets helplessly to Earth, Fabian Cortez assumes control of Asteroid M and sends hundreds of missiles towards Earth. Meanwhile, Rogue goes to help the X-Men and tries to find a missing Gambit. Magneto frees himself and returns in time to destroy both the missiles and Asteroid M. Everyone escapes before the asteroid is destroyed and they all return home (Gambit included!) Meanwhile, Cortez is rescued from the descending asteroid by Deathbird... and Apocalypse!

Retrieved from "https://marvel.fandom.com/wiki/X-Men:_The_Animated_Series_Season_4_7?oldid=5636718"
Community content is available under CC-BY-SA unless otherwise noted.