"Beyond Good and Evil - Part 2: Promise of Apocalypse" 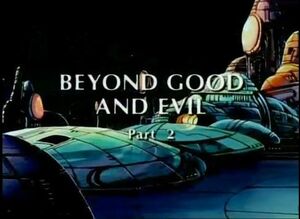 Cyclops is right. If Apocalypse and Sinister have joined forces and are able to instantaneously travel through time and space, all existence is in danger.

Appearing in "Beyond Good and Evil - Part 2: Promise of Apocalypse"

Synopsis for "Beyond Good and Evil - Part 2: Promise of Apocalypse"

When Oracle, the psychic member of the Imperial Guard is kidnapped by Apocalypse, Professor Xavier deduces his scheme involves capturing mutants with telepathic abilities. The X-Men are split up to track them down before the villains can, which puts Wolverine and Shard in the middle of a scuffle between Archangel and a ninja named Psylocke.

Like this? Let us know!
Retrieved from "https://marvel.fandom.com/wiki/X-Men:_The_Animated_Series_Season_4_9?oldid=6908739"
Community content is available under CC-BY-SA unless otherwise noted.