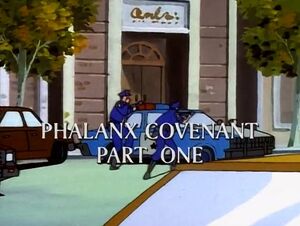 It is the spire! The Phalanx will use to summon the rest of my people, to add this planet to the Phalanx Empire. Is self's fault. Self never should have come here. Now self-friend Beast...Forge...your world is doomed...

Appearing in "Phalanx Covenant - Part One"

Synopsis for "Phalanx Covenant - Part One"

The X-Men are attacked by the Phalanx, a race of techno-organic aliens seeking to assimilate all life on earth. The alien Warlock allies with Beast, Forge, and Mr. Sinister to defeat the Phalanx.

Marvel's Bob Harras is credited as story consultant for this and the 2nd phalanx episode.

Like this? Let us know!
Retrieved from "https://marvel.fandom.com/wiki/X-Men:_The_Animated_Series_Season_5_1?oldid=6499629"
Community content is available under CC-BY-SA unless otherwise noted.