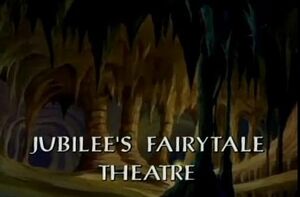 Jubilee leads a group of school children on tour of a cave on Mansion property, only to be caught in a cave-in. As the water in the cave rises, she keeps the kids calm by spinning a medieval fairy tale of knights, princesses, trolls, and dragons. Some of these characters might just seem to resemble the X-Men. As she tells the kids the stories, the real X-Men arrive and save them.

Retrieved from "https://marvel.fandom.com/wiki/X-Men:_The_Animated_Series_Season_5_10?oldid=4742155"
Community content is available under CC-BY-SA unless otherwise noted.