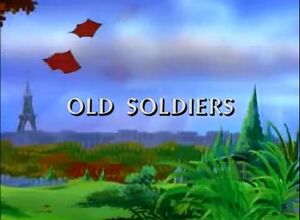 Wolverine thinks back to the time when he fought during World War II and teamed up with Captain America. Red Skull employed a team of scientists, led by Andre Cocteau (who was in fact an Allied spy), to build an unstoppable army of super-androids.

Captain America and Logan of Canada were sent by Captain Sawyer deep into enemy territory to rescue the "kidnapped" Cocteau. They encountered the Red Skull himself in France and met with heavy resistance. They retreated, believing Cocteau set them up. Months later, the Red Skull's plan was sabotaged by Cocteau. The Red Skull's fate after the war is unclear (though it would later be revealed).

Like this? Let us know!
Retrieved from "https://marvel.fandom.com/wiki/X-Men:_The_Animated_Series_Season_5_11?oldid=6849746"
Community content is available under CC-BY-SA unless otherwise noted.