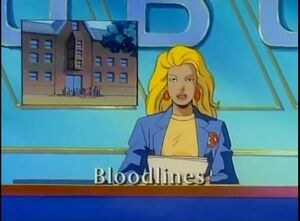 Graydon Creed tries to return to the friends of humanity by capturing and delivering his mother and step brother who are both mutants. Nightcrawler gets a mysterious message that his birth mother (whom he never knew) is in trouble. He turns to wolverine, Rogue and Jubilee for assistance. Together they infiltrate the Friends of Humanity compound in search of his mother. The plot thickens when one of the team members recognizes Nightcrawler's mother's voice.

Retrieved from "https://marvel.fandom.com/wiki/X-Men:_The_Animated_Series_Season_5_6?oldid=5303266"
Community content is available under CC-BY-SA unless otherwise noted.