X-Men: The Legacy Quest Book One 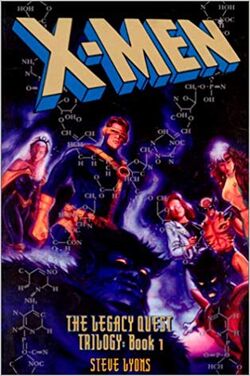 Hank McCoy -- the X-Men's Beast -- made himself a guinea pig in a desperate attempt to find a cure for the deadly Legacy Virus. His gamble succeeded. Now his blood is a living serum that can save countless lives. Unfortunately, the Beast is also a prisoner of Selene, the dread Black Queen of the New York branch of the Hellfire Club and she is literally bleeding him dry in order to further her own mad quest for power and wealth. The X-Men, and their uneasy ally, Sebastian Shaw, the mutant Black King of the Hong Kong branch of the Hellfire Club, are locked in a race against time to defeat Selene and free the Beast. But to their shock, they have discovered that Selene has found a way to turn time itself into a weapon against them. Meanwhile, Sebastian Shaw and the mysterious menace known as Mutant X, pursue a different agenda -- one that if it succeeds, will place the Legacy Virus serum in the hands of the most dangerous mutant in the world!

Like this? Let us know!
Retrieved from "https://marvel.fandom.com/wiki/X-Men:_The_Legacy_Quest_Book_One?oldid=6480199"
Community content is available under CC-BY-SA unless otherwise noted.