Immortality is just a life sentence with a more pleasant veneer. Everlasting life is terrestrial purgatory.

Appearing in "Dial M for Wanda"

Synopsis for "Dial M for Wanda"

Following the mysterious murder of the Scarlet Witch, X-Factor, overseen by X-Force and the X-Men investigate the murderscene. Through Daken's enhanced senses and Rachel Summers' chronoskim abilities, they are able to establish that she was grabbed from behind and dragged into a set of bushes to be killed out of sight. Northstar questions the series of events, questioning how someone would get the jump on a sorcesses who controls all of reality and pondering what kind of monster would be powerful enough to kill her in this manner.

While the murderscene is investigated, the forensic teams of X-Factor and X-Force examine Wanda's body. The two teams deduce that Wanda's killer was someone whom she trusted, and who cared for her, someone who left her body where they knew it would be found quickly. They also deduce that the killer was wearing a white cape and that Wanda was killed by strangulation through supernatural magnetiziation, making Magneto the prime suspect.

While X-Force, X-Factor and the X-Men investigate Wanda's death, the Quiet Council convenes to discuss the matter. An enraged Magneto argues that the Council should resurrect Wanda as not doing so would be risking the safety of Krakoa itself. Xavier points out that since Wanda was long believed to be a mutant, Cerebro has a back-up (albeit an outdated one) of her conciousness, resurrection is possible, but chastises Magneto for attempting to threaten the Council into resurrecting her. Mystique chimes in to point out that Magneto is suspicously beligerant in arguing for Wanda's resurrection, despite personally evading X-Factor's investigation attempts, accusing him of covering his tracks. As the debate spirals out of control, with Magneto enraged that the Council has allowed the X-Men and X-Force to monitor the investigation, risking the evidence being tampered, and with Emma Frost and Mystique suspicious of Magneto, Xavier calls for a vote on the matter.

Magneto, Kate Pryde and Nightcrawler vote in favor of resurrecting Wanda, but the other members of the Council vote against, meaning the vote fails to pass. An enraged Magneto attacks Xavier, only to be stopped by the other members of the Council. He angrily storms out, and finds the mutants of Krakoa celebrating Wanda's death due to her part in nearly wiping out mutantkind. As he wanders the island, Magneto is confronted by the teams investigating Wanda's death, who ask him to come with them. Realizing they believe he is guilty of killing Wanda, he refuses, leading to a fight. Despite facing the assembled forces of the X-Men, X-Factor and X-Force, Magneto holds them back. As the battle reaches a fever pitch, with Magneto and his daughter Polaris exchanging blows and harsh words, Magneto suddenly vanishes. Quicksilver has joined the fight, and at superspeed he snatches Magneto away and beats him to a pulp. Northstar stops him from killing Magneto, who is taken to the Healing Gardens.

Meanwhile, Wanda's son Tommy has been watching over Wanda's body, only to find that it has been swallowed by Krakoa itself.

While events are quickly unfolding on the island, Xavier has summoned the Avengers to the Krakoan gate in New York City, informing them that Wanda has died.

At the healing gardens Magneto is stable but comatose. He is left in this state to await questioning. Jean Grey attempts to peer into his mind to discern the truth, but finds his mindscape in chaos, rendering her unable to learn the truth. At the Green Lagoon, Quicksivler shares a drink to his sister's memory with his old Brotherhood teammates.

Meanwhile, the Scarlet Witch regains conciousness in a strange dimension. She is aware that she has been killed, but also that she is not dead. Confused, she asks where she is.

THE STORY THAT WILL SHAKE KRAKOA TO ITS CORE!

A horrific murder. A shocking revelation. A trial that will divide the new mutant nation.

Leah Williams and Valerio Schiti bring you a new epic that threatens the Reign of X and will upend the world of mutants. The truth is hidden, the danger is far from over, and the trial has begun 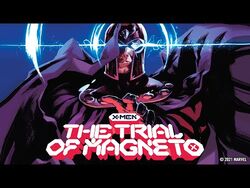